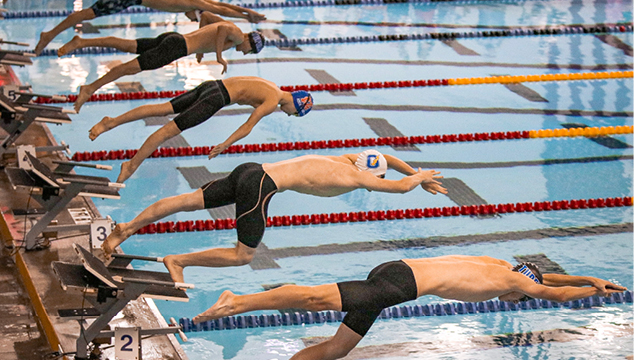 The Oxford boys’ swim team matched their highest finish in program history on Friday when they earned runner-up honors at the 2022 Mississippi Swimming State Championships.

The Chargers scored 76 points to secure the second-place finish while Madison Central racked up 116 points to run away with the contest.

“I was very proud of our swimmers this year. For as young as we are, having only one senior and four total upperclassmen, to do what we did was impressive and was probably not expected preseason,” said head coach Robert Gonzalez. “Our kids over-performed and deserve a lot of credit.”

Friday also marked the first time in school history the Chargers finished above Tupelo on the boys’ side in the state championship.

Oxford kicked things off on the right note when Booby Jubera, Landon Schock, William Berry and Jacob Tulchinsky set a school record with a time of 1:41.74 to finish first in the 200-yard medley relay.

Gonzalez said the strong finish in the opening relay set the tone for his squad and built momentum for the rest of the meet.

“That 200 medley relay set a huge tone Friday night,” Gonzalez said. “I never said it aloud but I believed it afterwards that we were not going to be denied a top-two finish after that race. Jacob’s anchor leg was as awesome and fun a race I have ever seen. Our boys were ready to go and that just catapulted a huge night of swims for them.”

Tulchinsky set another school record a few races later when he finished third in the 50-yard freestyle with a time of 22.03. He followed that up with another third-place finish in the 100-yard freestyle.

The junior also helped lead the Chargers to a second-place finish in the 200-yard freestyle relay before Berry, Schock, Knox Laws and Gates Allen posted a season-best 3:29.29 to finish third in the 400-yard freestyle.

Schock also reached the podium in an individual event when he placed third in the 100-yard breaststroke with a time of 1:01.92.

The Chargers also secured a top-three finish on the girls’ side as they narrowly edged out Ocean Springs to finish third behind Madison Central and Tupelo.

Sophomore Brooks Sipes led the way for the girls, setting a school record with a time of 1:09.45 to finish second in the 100-yard breaststroke while helping lead the 200-yard and 400-yard freestyle relay teams to third place finishes.