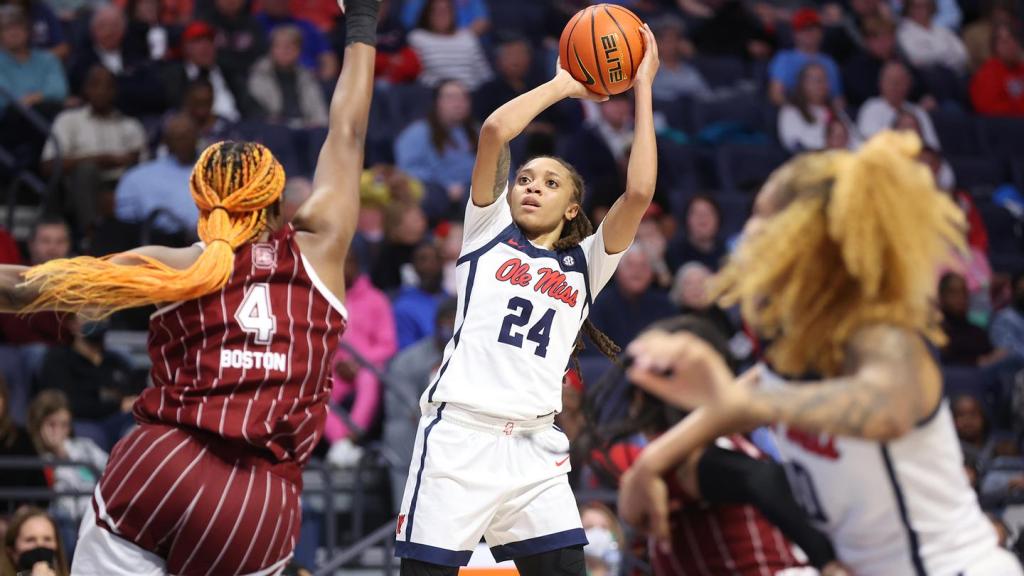 BIRMINGHAM, Ala. – Junior forward Madison Scott has been named a member of the coaches Preseason Second-Team All-SEC team while the Rebels were selected to finish eighth overall, the conference announced Wednesday.

Ole Miss was chosen eighth in the coaches’ poll, following a fifth-place selection last week in the media poll for its highest since 2005-06. Reigning national champion No. 1 South Carolina was selected to top the conference once again, followed by No. 5 Tennessee and No. 16 LSU. The Rebels received five votes in the Preseason AP Poll last Tuesday.

Scott earns the first preseason accolades of her career with a spot on the second team but is no stranger to SEC honors, as the 2020-21 SEC Freshman of the Year. The Indian Head, Maryland, native was joined on the second team by Arkansas’ Makayla Daniels, Auburn’s Aicha Coulibaly, Georgia’s Diamond Battles, Mississippi State’s Jessika Carter, Missouri’s Hayley Frank, South Carolina’s Victaria Saxton and Tennessee’s Rickea Jackson. South Carolina’s Aliyah Boston was again chosen as the Preseason Player of the Year, with LSU’s Angel Reese receiving votes as well.

Following a 23-9 campaign and its first NCAA Tournament appearance in 15 seasons, head coach Yolett McPhee-McCuin and the Rebels look to thrive in year five. Scott is joined in action by returners Snudda Collins and reigning SEC Sixth-Woman of the Year Angel Baker. Ole Miss added reinforcement in the offseason with six transfers in the offseason, including four with SEC experience including Mississippi State’s Myah Taylor and the duo from Arkansas in Marquesha Davis and Elauna Eaton.

Fans have their first opportunity to catch the Rebels in their lone exhibition matchup Friday against Delta State at 6 p.m. CT from the SJB Pavilion. Ole Miss opens the regular season a week and a half later at home against Kennesaw State at 5 p.m. streaming on SEC Network +.

Season tickets for the 2022-23 season are on sale now at OleMissTix.com