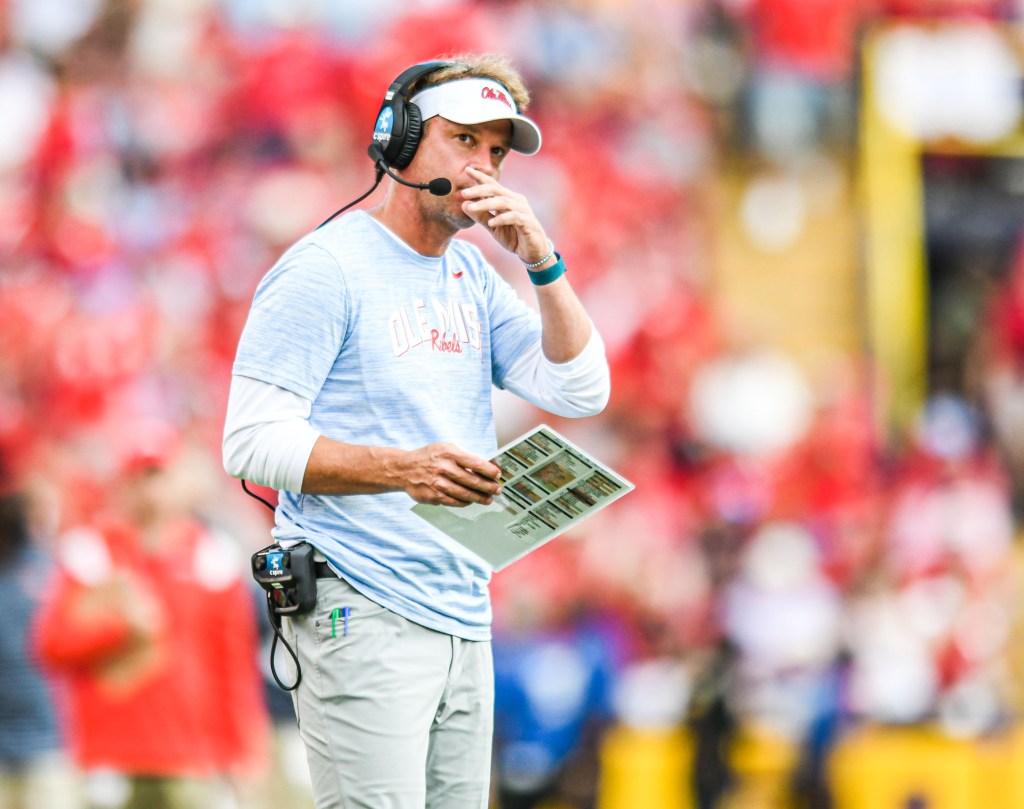 Before this Monday, it had been almost a year since the Ole Miss football team last convened at the Olivia and Archie Manning Athletics Performance Center after a regular-season loss. It was an unusual feeling for Lane Kiffin and his Rebels, and it presents a different challenge as they now turn the page to another tough SEC road test at Texas A&M.

HOW YOU RESPOND
Ole Miss’ last regular-season loss came on October 30, 2021, giving Kiffin and Co. almost a year since they last addressed their team following a loss. The Rebels raced out to a torrid start to the season and looked to be on their way to 8-0 when they claimed a 17-3 lead early at Tiger Stadium.

However, the Tigers clawed their way back into the game and ultimately leaned on quarterback Jayden Daniels and a raucous crowd, outscoring the Rebels 42-3 down the stretch for a 45-20 final.

“This is really, I guess in a year, our first time of having a Monday after a loss, coming back to meet with the players and practice and stuff, so it’s a new challenge for our guys, and the biggest key is that, one loss, you don’t allow it to move into more losses,” Kiffin said. “They started really well, didn’t let the crowd affect them and got up 17-3. Even after a lot of stuff, four minutes left in the third quarter, going into score to take the lead and played really poorly for the next 19 minutes after the interception, on all three phases, but especially offense and defense. We can’t let that beat us again.”

It was a gut punch for an Ole Miss team that hadn’t faced much adversity in its first seven games. The Rebels only trailed twice all season—briefly in the first quarter against Tulsa and in the first half against Vanderbilt—and never past the third quarter. However, it also gave the players and coaches some areas to improve upon going forward.

“I don’t want to magnify things just because you lose a game. Just like I don’t magnify that we’re great after we win a game. I said it, like you referred to, there were signs of these coming,” Kiffin said. “Once we had to drop back, some protection things, and the tackling on defense and limiting easy completions that turn into explosive plays. Those were magnified, and that’s what happens. When you go play really good players in a really hard environment, your weaknesses get magnified. We’re going to have the same thing this week if we don’t fix it.”

NEXT TEST IN TEXAS
After playing in front of 100,000-plus at Tiger Stadium—and even getting up-close and personal with the LSU faithful as they rushed the field following the game—Ole Miss will face a similarly hostile environment this weekend at Texas A&M.

“No time to sit around and mope with it,” Kiffin said. “We’re getting ready to go play probably one of the top five rosters in America. I think eight 5-star players a year ago, most ever. These guys are ultra-talented, and we’re going to play in one of the top-five hardest places to play. That’s a combination, obviously, that makes you have to do a lot of things right in order to have a chance to win. We’ve got a lot of work to do this week and got to get better.”

As Kiffin noted, Texas A&M boasts one of the most talented rosters in college football, though Jimbo Fisher’s Aggies have struggled to this point in 2022, holding a 3-4 record through seven games. However, that record doesn’t tell the whole story. The Aggies boast two wins against teams ranked at the time, holding victories against Miami and Arkansas. Of their four losses, three have come by six points or fewer.

Despite the record, Kiffin is making sure his team isn’t taking their opponent lightly, especially since the Aggies will have some additional motivation this weekend as they look to get their season back on track. Texas A&M hasn’t played in front of its home crowd since the Sept. 17 win against Miami.

“I think they’ll be very excited to play, and they’re coming home after being on the road for a long time,” Kiffin said. “Their crowd is always one of the hardest places to play in the country. I’m sure they’ll come and be ready to get back on the winning track. Like Jimbo said, they were close in the game, it’s not like they got blown out. They did some really good things to come back and make it a game in the end. At times they’ve played great defense throughout the year. It’s going to be a big challenge.”