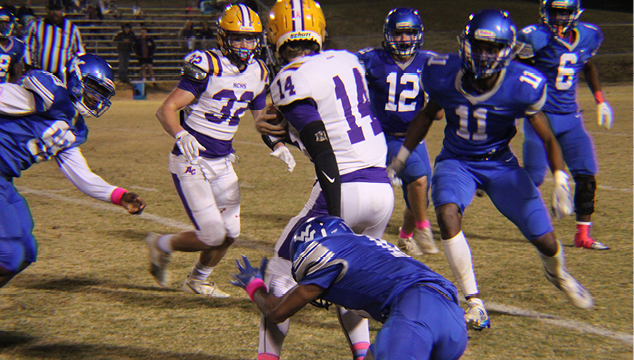 WATER VALLEY — Water Valley controlled the game from the opening kick on Senior Night as they rolled past Alcorn Central 41-0.

The Blue Devil offense started the scoring early when Jaden Morgan ran for a 35-yard touchdown on the second offensive possession of the game.

The Blue Devils never looked back after that.

Water Valley quarterback CJ Telford ran for a 46-yard touchdown on the next possession to blow the game wide-open before the Blue Devil defense got in on the action when Morgan intercepted Alcorn Central (2-8, 0-4 Region 1-3A) quarterback Reed Roberson’s pass and returned it for a 35-yard touchdown.

The Blue Devil defense recorded another turnover moments later when Daylon Vaughan intercepted another Roberson pass to get the defense off the field quickly.

The Blue Devil offense used that momentum to continue to roll when Telford hit Saveon Freeman for a 47-yard score.

The first quarter was capped off with a Blue Devil blocked punt that Quinton Cox recovered at the Bear 1-yard line.

The offense scored on the next play when Telford hit Walker Tedford for a touchdown.

Water Valley ended the first quarter up 34-0, and triggered the running clock early in the second quarter after Tyler Richardson hit Eli White for a 48-yard score to make the Water Valley lead 41-0 and close the half.

Alcorn Central came out fighting in the second half as they forced a Blue Devil fumble and recovered it at the Blue Devil 7-yard line. The Blue Devil defense held firm to force another Bear turnover on second and goal however to prevent a touchdown after Jaelyn Isbell recovered a Bear fumble.

“You know, we got to play a lot of young guys that usually don’t get to play tonight and Alcorn did not quit, so it was a good test for those guys. I thought our guys responded well and handled their assignments,” said Water Valley coach Brad Embry.

With tonight’s loss, Alcorn Central finishes region play without recording a single touchdown. The Bears were outscored 170-0 against district opponents.

With tonight’s win, Water Valley finishes the regular season with a 5-4 overall record and a 3-1 record in Region 1-3A play.

Water Valley will return to action next Friday, Nov. 4, as they host Rosa Fort (3-6, 2-2 Region 2-3A) in the first round of the MHSAA Class 3A playoffs at Bobby Clark Field.

Water Valley finished as the two seed in Region 1-3A behind Kossuth. Rosa Fort, out of Tunica, is the three seed from region two.  The winner of that game will meet the winner between Winona (8-1, 4-0 Region 3-3A) and Nettleton ( 6-4, 1-3 Region 4-3A) in the second round of the playoffs.

“The real season starts now. We need to come in tomorrow, get a good workout and therapy, and start getting after the film,” said Embry.