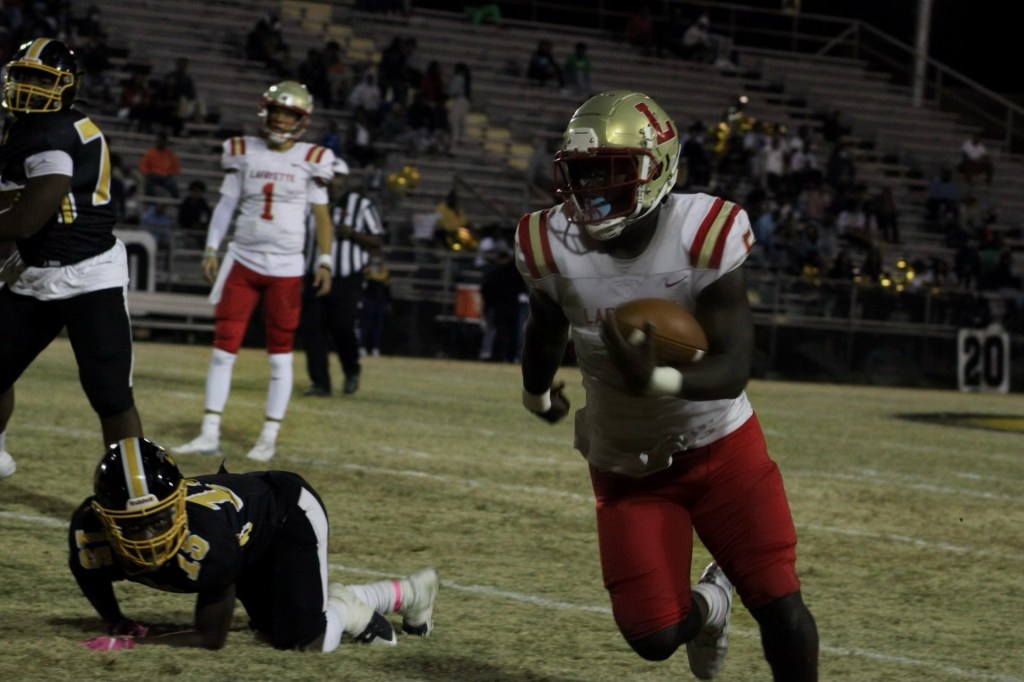 Lafayette's Jay Reed (5) runs against Greenville in the Commodores' 55-22 victory over the Hornets on Friday. (Ava May/CMG)

Lafayette used a huge first half to cruise to a blowout victory on Friday as they defeated Greenville 55-22 in their penultimate game of the regular season.

The Commodores (6-4, 5-1 Region 1-5A) traded blows with the Hornets for the first few possessions of the game before taking control in the second quarter as they took a commanding 42-14 lead into the half.

“I thought we executed really well, especially offensively. The offensive line probably had their best week of the year in practice and I thought that carried over to the game just like you want it to,” said head coach Michael Fair. “We had some big plays in the passing game but I thought it was the ground game that really set the tone for the night and everything fed off of that.”

Running back Jay Reed put together another stellar performance for Lafayette in the victory, tearing up the Hornets defense time and time again with remarkable success.

The big performance came just a week after the senior tailback set a career-high with 239 rushing yards in the Commodores victory over Cleveland Central.

“Jay is as good as I’ve ever seen him. I’ve coached him for a long time and he’s better than I’ve ever seen him,” Fair said of his star running back. “His vision is outstanding and he’s finishing runs the way we want him to. It’s  a lot of fun to watch him play because he’s playing really well right now.”

The win all but wrapped up the No. 2 seed in Region 2-5A for Lafayette, with third-seeded Columbus facing a tall task in Week 11 with a trip to West Point looming.

The Commodores wrap up their regular season next week as they travel to Lake Cormorant for a matchup with the Gators at 7 p.m. on Thursday.

“We know how talented they are and that’s a concern because they have great players on both sides of the ball,” Fair said. “It’s gonna be a huge game, it goes a long way for seeding. We want to lock in second place in our district with a win Thursday night so all of our time and energy is going into Lake Cormorant because we know it’s gonna be a big one.”