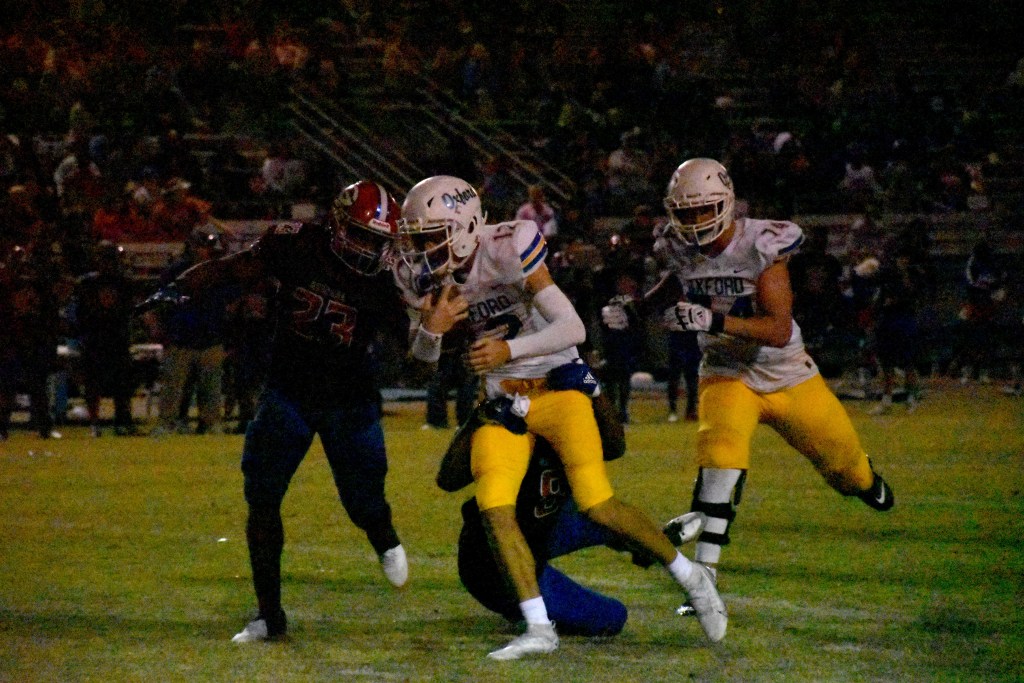 Oxford's Mack Howard (12) is tackled in the Chargers' 30-7 victory over Grenada on Friday. (Jared Redding)

Oxford breezed to a 30-7 victory over rival Grenada on Friday as they kept their playoff hopes alive heading into the final week of the regular season.

The Chargers (5-4, 3-3 Region 2-6A) came into the contest needing a pair of wins in their final two games in order to avoid missing the playoffs for the first time since 2017.

They managed to stave off elimination for at least one more week with Friday’s victory, which marked their first time eclipsing 30 points in a game since putting up 43 in a victory over Murrah on Sept. 23.

Their defense, which has looked porous throughout the season, held a strong Grenada run game in check throughout the night as they dominated the line of scrimmage and got into the backfield to force plenty of negative plays.

“I thought we played really well on the line of scrimmage on defense — we really controlled their run game,” Cutcliffe said. “They’ve been a heavy run team so that’s a big challenge when you play Grenada but we accepted the challenge. I thought our guys took it head-on and came into this game determined to stop the run.”

Oxford now turns their attention to Madison Central, who comes to town Thursday riding a two-game winning streak after knocking off Germantown and Murrah in consecutive weeks.

The Chargers lost 31-21 to the Jaguars in their last meeting, which came in the second round of last year’s MHSAA Class 6A playoffs.

Oxford’s last regular-season win over Madison Central came on Sept. 2, 2016 when they defeated the Jaguars 21-17 on the road.

“Well it’s a short week with a Thursday game so your preparation has to be that much better,” Cutcliffe said. “We’ve got to take that challenge on. Essentially for us the playoffs started this week so we’ve got to attack next week with the same mentality.

Oxford will host the Jaguars at 7 p.m. on Thursday at Bobby Holcomb Field.