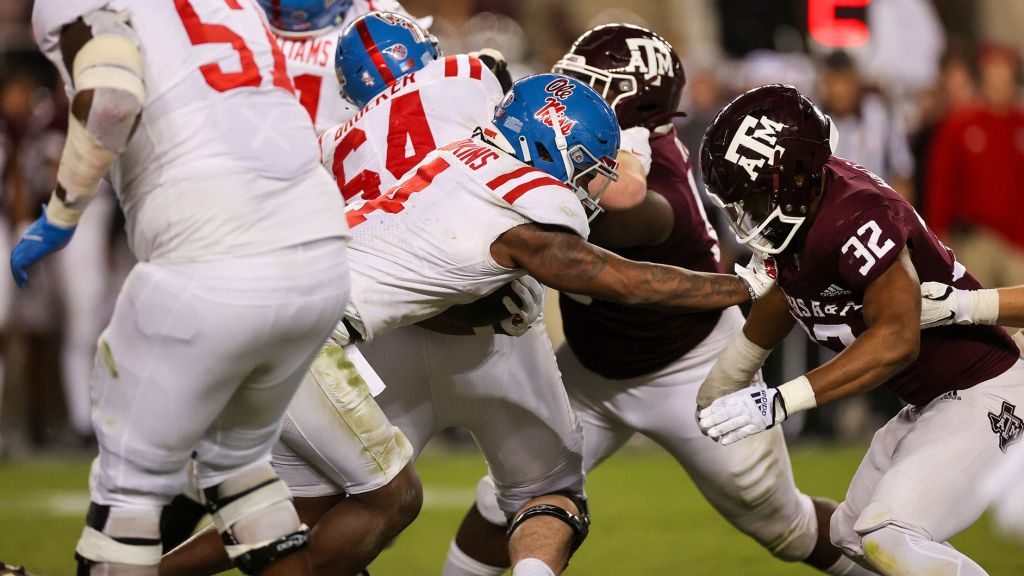 BIRMINGHAM, Ala. –After a historic rushing performance Saturday at Texas A&M, Quinshon Judkins and Nick Broeker earned Southeastern Conference Freshman and Co-Offensive Lineman of the Week laurels from the league office Monday.

In total, the Rebels have earned nine SEC weekly honors this season, four from Judkins, two from Broeker and one each from Jonathan Mingo, Micah Pettus, and Jared Ivey.

In a 31-28 road win in Bryan-College Station, Texas, Judkins posted his first career 200-yard rushing game, tallying 205 yards and a touchdown on 34 carries. In doing so, Judkins broke Ole Miss’ freshman rushing record now with 1,036 yards on the year and became the fastest true freshman in the SEC to reach 1,000 yards rushing since Florida’s Emmitt Smith did so in seven games in 1987.

Judkins’ 34 carries were the most by a Rebel since Deuce McAllister ran 36 times against Mississippi State in 1999. His 205 yards rushing rank ninth on Ole Miss’ single-game list and are the most since John Rhys Plumlee ran for 212 against LSU in 2019. He’s second in the SEC in behind Arkansas’ Raheim Sanders and ranks seventh nationally in rushing yards. Judkins leads all freshmen nationally in rushing.

Judkins found the end zone for the seventh consecutive game. He has 12 total touchdowns in that span. The freshman out of Pike Road, Alabama, leads the SEC and ranks third nationally with 13 rushing and 14 total touchdowns on the year.

Behind Broeker and a stout Rebel O-line, it was a dominant day on the ground for Ole Miss even when the ball wasn’t in Judkins’ hands. Jaxson Dart netted 95 yards rushing and Zach Evans added 75 as the Rebels flirted with 400 yards on the ground, tallying 390 in front of 100,000-plus fans at Kyle Field, the most given up by the Aggies since allowing a school-record 393 against Texas in 2003.

Broeker graded out at 94 percent and was also instrumental in pass protection, allowing no pressures or sacks on the night, helping Dart finish 13-for-20 passing with three touchdowns through the air. Ole Miss racked up 530 yards of total offense, the most allowed by Texas A&M since yielding 544 to Alabama in 2020.

Judkins, Broeker and the Rebels enter a hard-earned by week at 8-1. The Rebels will resume SEC play next week, hosting No. 6 Alabama on Saturday, Nov. 12.