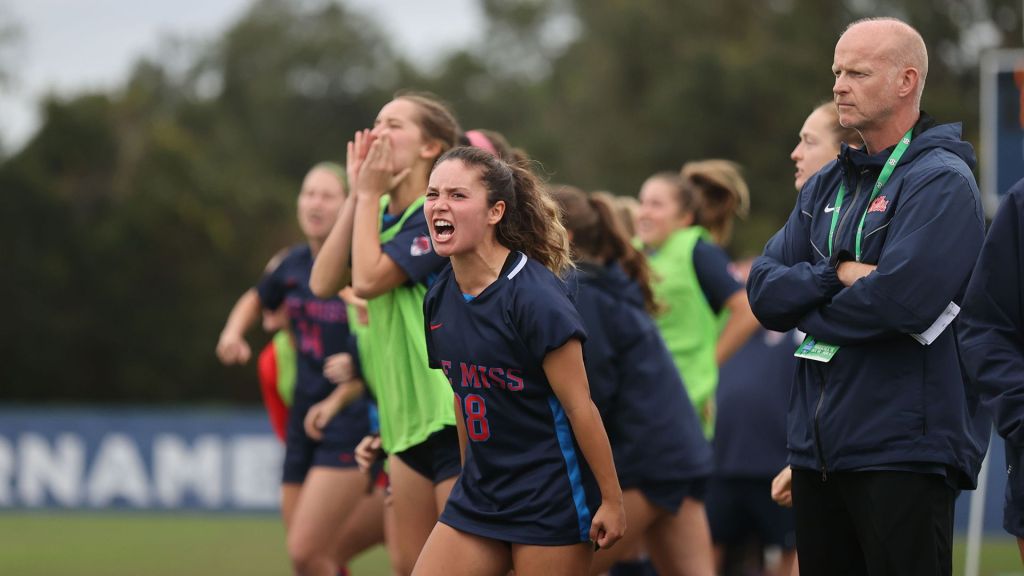 Ole Miss forward Stella Downing (98) and teammates celebrate during the Rebels win over LSU in the SEC Tournament on Sunday. (Ole Miss Athletics)

PENSACOLA, Fla. – The three-time SEC Goalkeeper of the Year showed why she is the best to ever do it Sunday afternoon as Ole Miss (9-6-4) shut out LSU (9-3-7) in a match that was decided on penalty kicks. Ashley Orkus and the Rebel defense kept the Tigers off the board through regulation, two overtime periods, and three rounds of penalty kicks to advance to the quarterfinals.

The Rebels now advance to the quarterfinals where they will face the SEC East Division Champion South Carolina Gamecocks on Tuesday.

Orkus made three saves during the match, including one big one just a minute into the second overtime period. Her two biggest stops came in the shootout however, as she kept the first two Tigers from scoring and gave the Rebels a chance to advance. Kayla Chatman-Haggerty, Aubrey Mister, and Price Loposer each made their shots while the third Tiger sent her shot over the crossbar to give Ole Miss the win.

Both teams showed out defensively as there was just one shot on goal in the first half of the match. Mo O’Connor had the best chance for the Rebels in the opening half, as she put one off the crossbar in the 36th minute. LSU took eight total shots in the first 45 minutes of play, doubling Ole Miss’ total, but never got one close.

The Rebels turned up the heat in the second half, outshooting the Tigers 9-4. Mister started the attack in the 52nd minute with her best chance of the match, striking it from outside of the box and forcing LSU’s Mollee Swift to make a save just below the crossbar. Ole Miss couldn’t get one in the back of net however, as the match went to overtime.

Neither team could gain an advantage in the two overtime periods, taking just three shots apiece. Orkus made a big save in the second overtime period to keep LSU off the board and send the match to a shootout.

O’Connor opened the shootout for the Rebels with a shot on target that was saved by Swift. The first Tiger up was denied by Orkus and then the scoring started for Ole Miss. Chatman-Haggerty put hers off the crossbar and down into the back of the net, Mister slotted hers to the right side, and Loposer put the dagger in on the left.