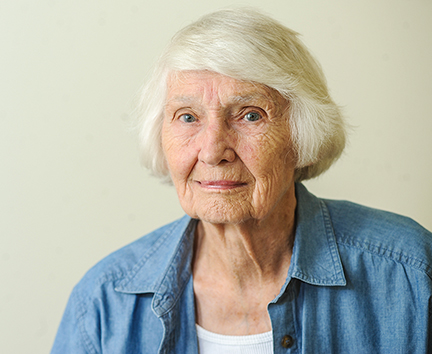 On Thursday, Nov. 10, Maralyn Howell Bullion will observe the 100th year since her birth at the old Culley Hospital on Van Buren Street in Oxford.

To mark the occasion, her family wanted to plan for a birthday party for two days later, on Saturday, Nov. 12, when everyone could come. However, that Saturday is when Ole Miss plays Alabama, and Maralyn said she was not going to miss that game.

Therefore, the weekend before – on Nov. 5 – around 70 family members, friends and other loved ones will gather at her home to honor their favorite centenarian. “If we had it on the next weekend, mom would be glued to the TV,” son Jim said with a laugh, adding that Madalyn was happy that Ole Miss won Oct. 29 and “was looking forward to their ranking in the national college poll this week.”

Maralyn Howell Bullion’s long history started with the deep roots planted in Oxford at her birth; roots that intersect and thread in numerous directions. Though marriage took her away from Oxford for a while, Bullion returned after her husband’s passing in 1991, eager to care for her mother (who lived to age 99) and to spend more time with her brothers, Jim and Hershel Howell, and with her many nieces and nephews.

“She rekindled her love of Oxford and moved back in 1998,” daughter Noelle wrote of her mother. Maralyn’s final endeavor was to build her warm and inviting house off Highway 6 in order to always welcome her six children home. Amid the property’s beautiful large trees sits an old pecan, a favorite.

“She built a house with a long and wide front porch, which has played host to numerous gatherings, including her large and merry annual July 4 family reunions,” said Noelle. “Nieces, nephews, cousins and friends regularly stop by and hang out with her, sharing a few minutes of her love and wisdom.”

Maralyn’s parents, Braxton and Hilma Howell, were both teachers, working in schools in Scobey, Scuna Valley, Sylva Rena, Tallahatchie and Burgess. Madalyn spent most of her childhood in those communities, and noted that throughout those Depression years, “we lived pretty primitively,” often with oil lamps, a water pump and no indoor plumbing. But happy memories abounded: lots of good friends, singing in the church choir, playing basketball, taking care of various animals, watching the train roar through town, fishing with her brothers and so much more.

Maralyn’s interesting life revved up during her University High School years, where she did well academically and enjoyed a thriving extra-curricular life. She wrote for the school paper, dated the football team captain and socialized with William Faulkner’s nephew and stepson. In her senior year, her father was elected Lafayette County tax assessor and later served as chancery clerk, further ensconcing the family in Oxford.

Next came Ole Miss, where Bullion joined Phi Mu and made lifelong friends. She often borrowed her brother’s green convertible Model A Ford, nicknamed “The Green Hornet,” to transport friends to all sorts of fun outings. “We would buy a quarter’s worth of gas and had to take up a collection to get even that amount of money,” she told Noelle.

Her college years were marked by World War II, causing many dear friends to “never come back.” During this time, Bullion continued to build a deep involvement on campus, including writing for the school newspaper and serving as a society editor at the Oxford Eagle, as well as participating in archery and serving as Phi Mu president. In addition to fraternity and sorority dances in the gym, she would occasionally venture up to Memphis to go to a dance on the roof of the Peabody Hotel.

To cap off her college career, Bullion was elected the first woman student body president in 1943, defeating a “very popular” member of the DKE fraternity.

After graduating in 1944 with a degree in English and sociology, Bullion moved to Memphis, where she worked as a copywriter and proofreader for a pharmaceutical company. She also worked in the education office at a hospital and those experiences led her to a writing position with the Red Cross in Atlanta.

It was there, on her daily trek to get the Memphis paper at a nearby newsstand, that Maralyn Howell met her future husband, Jim Bullion, who was on leave from the Army.

Her union with a military man from Minnesota brought on whole new dimensions to Maralyn’s life, Noelle said, which included six children – and lots of travel. When the couple lived outside of Paris and in Heidelberg, Germany, they took advantage of their location to visit many parts of Europe, including “a fascinating trip” behind the Iron Curtain.

In 1960, the family moved back to the states and settled in Washington, D.C., where Jim worked for the government and Maralyn raised the children, was active in church, and taught English in Washington inner-city schools.

Maralyn Bullion’s life in Oxford has reached out in many directions to touch her beloved community in countless big and little ways. Since her return to Oxford, she has been a dedicated member of St. Peter’s Church, participating in Bible study, the Racial Reconciliation Committee, the Leap Frog Program and the Pastoral Committee that provides food and fellowship to those in need. She considers her visits with those living at the Regional Center her most important outreach with the church.

She has been an officer and member of the Daughters of the Revolution and continues to attend meetings in Oxford when she can. As a lifelong avid reader, Bullion remains active with the “young women” in her beloved book club. “Her memories and knowledge of family and county genealogy are as deep as her Mississippi roots,” Noelle said.

One of the most direct impacts Maralyn Bullion has had on Oxford is her work with the Lafayette County Heritage Foundation. In addition to countless hours helping organize genealogical documents and other tasks, she was instrumental in the preservation and conversion of the Burns Belfry Church into a museum and multicultural center dedicated to local African-American history. Her tireless efforts also went into the restoration of the L.Q.C. Lamar House.

Her sense of humor has always been one of her strengths and hasn’t abated over the years, her children said. She recently told them that if they dared to have a birthday party she was going to go off on a Caribbean cruise – if she could find a boyfriend to go with her. “She’s the youngest 100-year-old ever – she constantly amazes us,” said Noelle.

It is supposed that the children won that round, since the birthday party is definitely a go. It’s not as though she can escape easily – she stopped driving a few years ago. (However, she has admitted to renewing her license and car insurance, saying in fun “in case I have to get away from you all someday,” her children noted.)

“Her sense of humor keeps us all laughing and we are hoping that we have all inherited her love for all living things,” Noelle said.

Bullion, of course, remains a loyal and active booster of Ole Miss, where her son late son, Stuart, served as the chair of the department of journalism from 1997 to 2004. Not a weekend goes by when she isn’t watching “The Game” and chatting with family and friends about performance and rankings.

The Bullion children speak fondly of their mother, calling her “loving and strong.” Many of the sons followed in their father’s military footsteps and rose high in the ranks before branching out into other careers. The two daughters taught, just like their mother and her parents before them.

Stuart served as head Ole Miss journalism department before his death from cancer. Carma Fitzpatrick of Middlebury, Vt., is a retired school teacher and John of Minneapolis is a retired business professional. Tom lives in Oxford right next to their mother and works for the city, while Jim of New Hampshire is in finance (and much more – look him up) and Noelle Locke of Fairfax, Va., is also a retired school teacher.

From them, Maralyn has 17 grandchildren and five great-grandchildren scattered all across the country in at least 12 states.

Maralyn Howell Bullion’s ancestors settled in Mississippi in the early 1800s, building log cabins and living off the land to create a lasting home. Centuries later, their century-old descendant lovingly carries on that legacy – helping to make Oxford one of the very best places to call home.

“It’s been a fun ride, and I’m ready for the next hundred years,” Maralyn told Jim, who added that “we all say that we are blessed to have a mom who loves us all unconditionally and has taught us to do the same to others and to be proud of our Mississippi roots.”