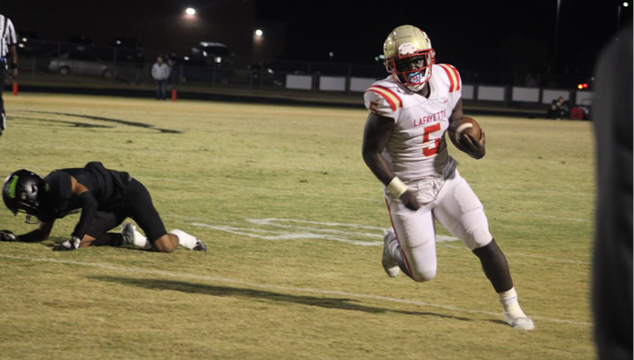 Lafayette's Jay Reed (5) runs against Lake Cormorant in the Commodores' 30-7 win over the Gators on Thursday. (Kimora Jones/CMG)

Lafayette clinched the No. 2 seed in Region 1-5A on Thursday as they fended off a second-half comeback attempt by Lake Cormorant to come away with a 30-7 victory in their regular-season finale.

The Commodores (7-4, 6-1 Region 1-5A) dominated from the opening kick, jumping out to a 21-0 lead in the first half behind a strong performance from running back Jay Reed.

The senior tailback rushed for 118 yards and two touchdowns in the opening half as he put the team on his back and wore down the Gators’ defense with physical running.

“He just does a great job of turning something that looks like there’s not much there into a big play,” head coach Michael Fair said of Reed. “He plays so hard, his vision is great and he’s finishing runs better than he ever has so he’s doing a tremendous job for us right now.”

Lafayette carried a comfortable lead into the break, but quickly found themselves in hot water after a slow start to the third quarter.

First, the ‘Dores surrendered a touchdown on the opening drive of the second half that put the Gators on the board and shrunk the lead to 14.

Then, quarterback Charlie Fair was intercepted on the ensuing drive as his pass tipped off the hands of receiver J’Miere Jones right into the waiting arms of a Lake Cormorant defensive back.”

With the Gators knocking on the door trying to make it a one-possession game, senior Slayden Mooneyham came up with a huge play as he made a leaping interception at the 10-yard line to halt the drive and give possession back to the ‘Dores.

“That play was huge. We gave up a few big plays to start the half but for Slayden to get the turnover and get the ball back for us — it kind of settled everyone down and we were able to get back into a rhythm to finish the game out,” Fair said.

They settled in after that, forcing a safety late in the third quarter before pushing the lead back out to three scores on a six-yard touchdown rush by Reed early in the fourth.

The win marked the sixth consecutive victory for Lafayette after a 1-4 start to the season.

“It was one of those things that wasn’t a whole lot of fun to go through but it kind of made us who we are,” Fair said of the slow start. “It kind of revealed the character of this team and I think all of us as coaches really liked what we saw and knew that if we could hold it together we could string together some wins.”

They have outscored opponents 255-78 over that stretch as they began clicking on both sides of the ball at the perfect time.

They now move on to face Callaway at home next week in the first round of the MHSAA Class 5A playoffs in the first-ever meeting between the two schools.

The Commodores will kick things off against the Chargers at 7 p.m. on Friday, Nov. 11 at William L. Buford Stadium.