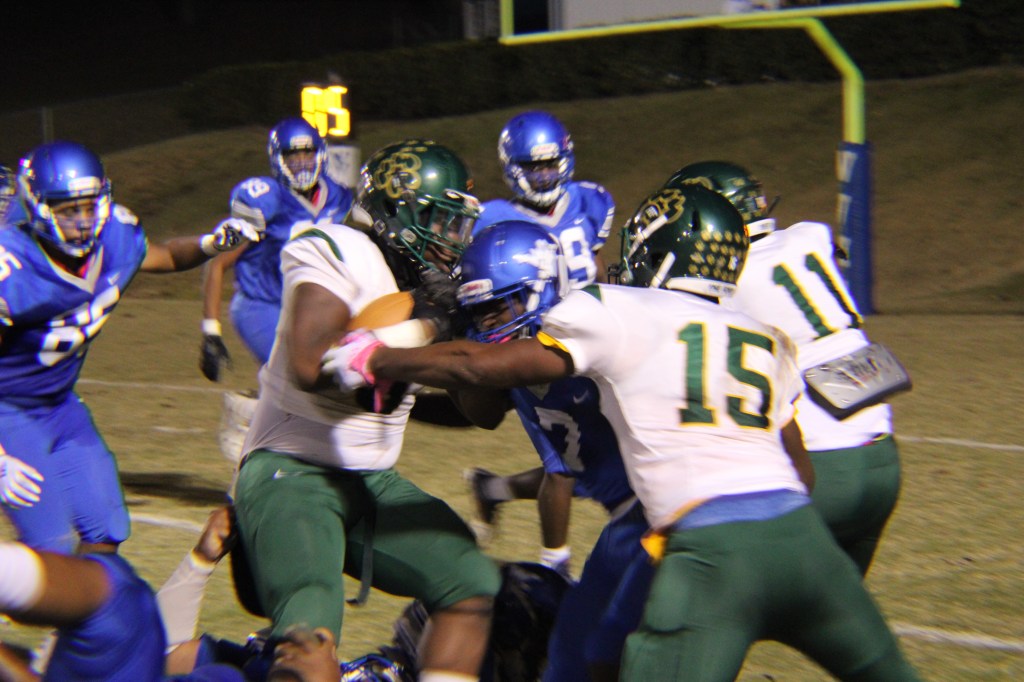 WATER VALLEY- In the playoffs, there is one goal: to survive and advance. Water Valley did that Friday night as the Blue Devils defeated the Rosa Fort Lions of Tunica 48-38.

Rosa Fort (3-7) started the scoring early when Jordan Williams hit Ardavius Harris for a 41-yard score on fourth down. The Blue Devil defense tightened down after the touchdown to shut out the Lions for the rest of the half.

The Water Valley offense rolled with a steady rushing attack led by Jaden Morgan. Morgan scored two touchdowns in the first half with a 2-yard score and two-point conversion to tie the game and add a 3-yard touchdown to extend the lead. The Blue Devil defense used an interception by Saveon Freeman to take control of the game in the first half. Que Carothers added a 19-yard touchdown run after the play to capitalize on the momentum.

The Blue Devils felt they were in control for most of the third quarter after  Morgan returned a floated Lion pass 85 yards for a touchdown, then Will Embry recovered a fumble on the next Lion drive to give Water Valley all the momentum. The Blue Devil offense would capitalize on the momentum with a 21-yard touchdown pass from Telford that was tip drilled by Freeman.

Rosa Fort slowly crawled their way back into the game with two quick scoring drives to make the score 35-22 at the end of the third quarter. Ardavius Harris completed a 23-yard touchdown pass to Jordan Williams and added an Ahmad Harris running touchdown and 2-point conversion to get close.

The Blue Devil offense remained explosive and kept the Lions’ defense on their heels when Que Carothers ran the opening play of the fourth quarter for a 55-yard touchdown.

The Lions would not go away after Ahmad Harris rushed in for his second touchdown of the night on a goal-line play. The Blue Devils would seal the game with an 11-yard touchdown by Brayden Buford. The lions would add a touchdown late to make it close when Ardavius Harris completed a pass to Ahmad Harris for a 29-yard touchdown to cut the score to 10 to close the game.

“You just got to win. There are a lot of good teams at home right now and we aren’t. We came out hot and Rosa Fort made some good adjustments. They have really good athletes, never threw in the towel, and never quit,” said Embry.

Water Valley (6-4) will return to action next week as they advance to the second round of the MHSAA Class 3A playoffs. The Blue Devils will travel to face the Region 3-3A champion Winona (9-1). Winona defeated Water Valley earlier this season, 47-28.

This will be the Blue Devils last year in 3A as they will be reclassified to 2A for the 2023-2025 seasons. The new region will feature Bruce, Calhoun City and M.S. Palmer(Marks). The region also includes Ingomar for all sports but football. Ingomar does not field a football team.