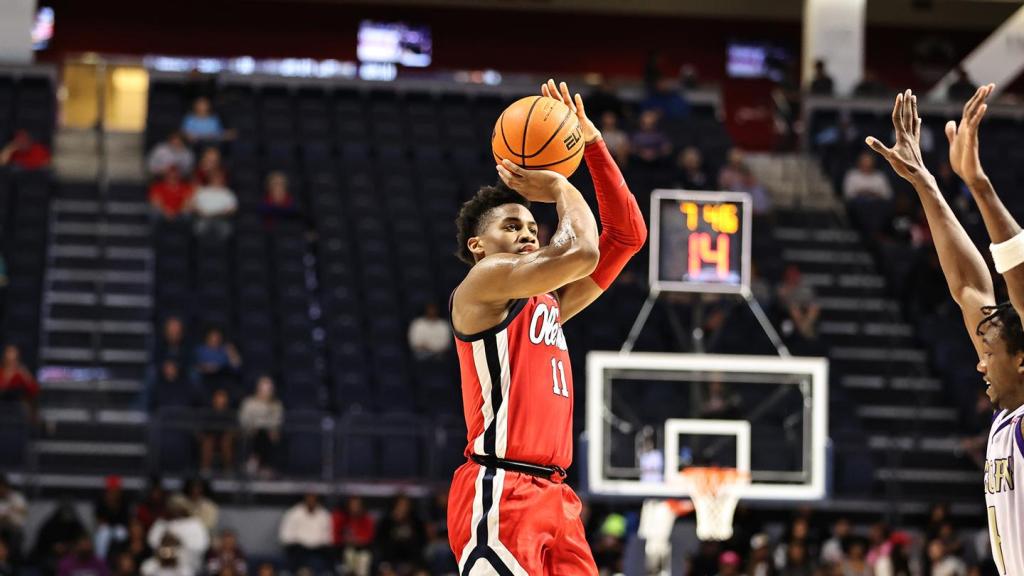 Ole Miss men’s basketball found itself in a first-half dogfight against the defending SWAC champions in Alcorn State, but a big second-half momentum swing helped push the Rebels past the Braves, 73-58, to open the 2022-23 regular season at SJB Pavilion on Monday night.

The Rebels (1-0) were up 28-27 at the break, but two big second halves from Matthew Murrell and Robert Allen helped Ole Miss separate over the Braves (0-1) – thanks in part to a tenacious second-chance effort on the boards, particularly by Allen and his five offensive rebounds. Both teams shot roughly the same on the night both overall and from three, but it was a 9-0 run in the closing minutes of the game that energized the crowd and eventually put the Rebels on top by a game-high 18 with 3:11 to play.

“To be 1-0 is a great start,” said Ole Miss head coach Kermit Davis. “(Alcorn) is an in-state team that won their championship, they’re extremely well-coached and a hard-playing team. I know there are some other really good teams in the SWAC, but (Alcorn) will be a hard out and could be an NCAA Tournament team.”

Alcorn’s feisty defense helped stymie the Rebel offense in the first half to just 31 percent shooting, and the Braves got big nights out of Byron Joshua (15 points) and Keondre Montgomery (14 points). However, offensive rebounds kept the Rebels in the game time and time again, eventually helping spur that key late second-half run to push Ole Miss ahead for good.

“(Alcorn) were physical, their pressure up the floor was good,” Davis said. “But we kept offensively rebounding the ball, and it gave us some opportunity.”

The second half surge was also spurred by two scoring surpluses from junior Matthew Murrell and senior Robert Allen, who combined for 35 points on the night – 29 of which came in the back half. Murrell tied a career-high with five trifectas made en route to 20 points (14 in the second half), while Allen scored all 15 of his points in the final 20 minutes of action.

Tonight’s game was even more important for Allen, who is coming off having to miss most of last season due to a torn ACL. His 22 minutes played were the most since playing 26 against Mississippi Valley State on Nov. 26 last season, just two games before his season-ending knee injury against No. 18 Memphis. Allen’s 15 points tonight were an Ole Miss career-high.

“I’m proud of myself. A lot of the times I don’t take the moment to say that to myself, so saying that in front of you guys just means even more,” Allen said. “Just going through the things more mentally than physically, going through something like this has been just very big for me. I’m just thankful to God I got a second chance to play basketball again.”

“You can just see how much he means to the culture of this program,” Davis said.

Ole Miss remains at home this coming Friday when it will host Florida Atlantic (1-0). Tipoff is set for 6 p.m. CT inside SJB Pavilion and on SEC Network+.