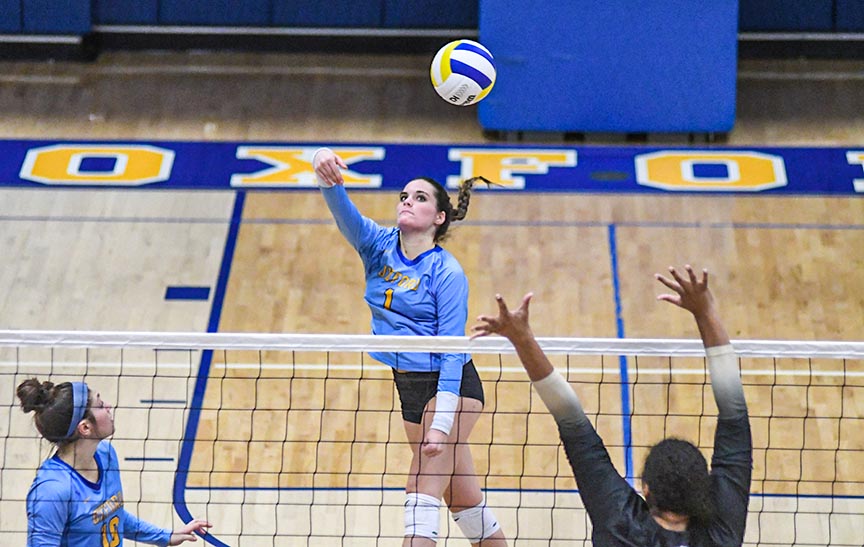 Oxford High School hosted a signing ceremony for five athletes Wednesday as they made their college commitments official on National Signing Day.

Ellis, a pitcher for the Chargers’ baseball team, signed with Meridian Community College after committing to play for the Eagles back in May.

Ellis was a key contributor to Oxford’s run to the North Half Championship Series last season, and will be asked to take on an even bigger role with the team this year after the departure of seniors Dixon Webb and Ty Wicker.

He said he is excited to start this new chapter of his career.

“I’m stoked. I think the team that we’re gonna have is going to be really good so I’m ready to get with the guys and get started on a roll,” Ellis said.

The 6-foot-5 righty added that he still has unfinished business at Oxford with a full senior season still on the horizon.

The Chargers suffered an emotional loss to DeSoto Central in last year’s playoffs, and Ellis and company are eager to get back out on the field to try and avenge that loss.

“Last year — that rough ending kind of built a fire under all of us and we’re ready to get the season started and get on a roll,” Ellis said.

The 5-foot-5 defender has played in a variety of roles for Oxford over the course of her career, spending time at left-back, center-back, holding midfielder and forward.

She said she is excited to face a new challenge at a higher level of competition, but added that she also has unfinished business at the high school level with the soccer season just getting underway.

Lyons, an outside hitter for the Chargers’ volleyball team, signed with Itawamba Community College after committing to play for the Indians in July.

She played an integral role in Oxford’s Region 3-6A championship this season, leading the team in kills and finishing second in digs with 320 and 293, respectively.

The ceremony was especially noteworthy for the senior as she was informed that she eclipsed 1,000 kills for her career this season.

“I had no idea. I knew [coach Ashley Martin] was going to go back and make sure she didn’t miss any stats but she didn’t tell me anything about her finding stuff so that was a huge surprise, I had no idea,” Lyons said. “I didn’t want to do too much on stage so I just looked at her like, ‘really Martin?’ because I had no idea. That was a special way to find out though so I’m glad she did it that way.”

The Chargers also had two golfers make their commitments official as Downing signed with Southern Miss while Yerger signed on to play with North Texas.

Oxford will host a separate signing ceremony for senior volleyball player Torrey Tkach on Friday as the 6-foot-3 middle blocker is set to become the first Charger volleyball player to sign on with a Division I university since the late Amie Ewing committed to Ole Miss in 1999.