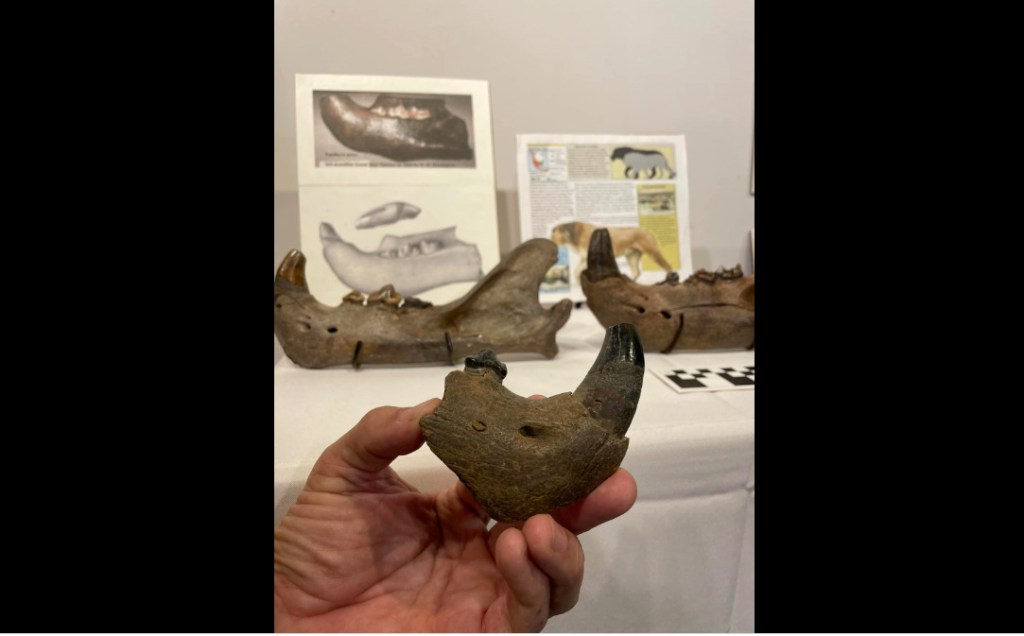 Photo courtesy Anna Reginelli Oxford's Wiley Prewitt found this fossil from an American Lion on an exposed sandbar near Rosedale.

An Oxford man recently unearthed a rare fossil of an Ice Age lion in an exposed sandbar on the Mississippi River.

Wiley Prewitt, of Oxford, was exploring a sandbar near Rosedale on Oct. 26 when he saw something black with teeth in the gravel.

“I could tell from the teeth right away that it was a fragment of a carnivore’s jaw but I dared not hope it was from an American lion,” he told McClatchy News. “It certainly looked right but I wouldn’t let myself believe it.”

According to reports, American Lions went extinct 11,000 years ago. Before that, they were some of the largest cats on the continent, growing to 8 feet long, 4 feet tall and up to 1,000 pounds.

Prewitt’s discovery is only the fourth known example of a lion fossil found in the eastern United States. He apparently brought the fossil into a Mississippi Fossil and Artifact Symposium and Exhibition event on Oct. 29, asking for expert advice.

Anna Reginelli, event organizer, said the event just happened to have the other previously found American Lion fossils on hand.

“I have had very important artifacts and fossils come into my outreach programs and events, but nothing as significant as the newly discovered American lion fossil,” she told McClatchy News.

The American Lion dates back 340,000, according to experts, and roamed from Alaska to Southern Mexico. Evidence of the animal has been found the La Brea tar pits in California but is rare east of the Mississippi River.

The sandbar Prewitt was exploring had surfaced due to the unusually low water levels in the Mississippi River.