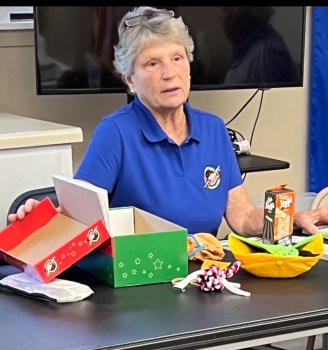 For some planning for Christmas before Thanksgiving is too early, for others it’s not early enough.

Mae Stone of Oxford is one such person who prepares for the holidays months in advance.

She has been the dropoff coordinator for Operation Christmas Child in Oxford for over 20 years.

“A woman brought one of these little brochures to church and she said, ‘I think this is a wonderful idea,’  and so we all filled our little shoeboxes and brought them back to church and said what do we do with them,” Stone said.

She explained her father, who was a pastor and physician, was the person who instigated having a dropoff location in Oxford.

“He said we can be a dropoff center right here in Oxford and we can use my office,” she said. Stone said her father was semi-retired at the time and she was his only employee. “I said oh thanks dad. I guess I’ll be doing this

“I felt almost immediately after, that if I was doing the work that God wanted me to be doing, he would change my heart (about it) and he did. I’ve been doing this for 22 years.”

Stone said while she has boxes, which people can fill, any shoebox size container will do.

“I love to put a small stuffed animal in,” she said. “These boxes go to kids in areas of war, famine and natural disasters. Some in orphanages, no parents, nobody who cares a thing about them, but it gives them something to love, to hold.”

Stone said each box is different and what’s inside depends on the person who packs it, explaining one local man packs boxes for boys with tools, like hammers, nails, screwdrivers and other building items.

She said there were a few items which were not allowed, such as candy, food, liquid, toothpaste, war toys, etc.

Stone said boxes are inspected at distribution sites and if such items are discovered, they are removed and replaced with appropriate items.

“Those types of items are donated to local charities. Nothing is thrown out,” she said.

“We’d love for quality items to go in these but we’re more concerned about the love of Jesus that comes out of these.

“With each shoebox, each child gets a little gospel booklet. It’s called ‘The Greatest Gift.’ It’s in their own language. I think they’ve translated them into about 100 languages.

“Afterwards (the children) are invited to a discipleship class that is 12-weeks long. At the end of the 12-weeks, they are asked to list nine people they’d like to share the gospel with. So you see (your gift) doesn’t just stay with that one child,” said Stone.

She added those who pack a box are asked to donate $10, which pays for a variety of things including shipping, printing of the booklets and teacher training.

Stone said volunteers get the boxes through customs in each country and then work out how to get them across their countries.

“They get them across their countries by boat, by camel, by elephant, and any way they can get those boxes to these kids.”

She said the donation also covers a graduation party when the 12-week course is completed. “They get a New Testament in their own language.”

Stone said 198 million shoeboxes had been packed and delivered to kids in over 100 countries since the program began in the 1990s.