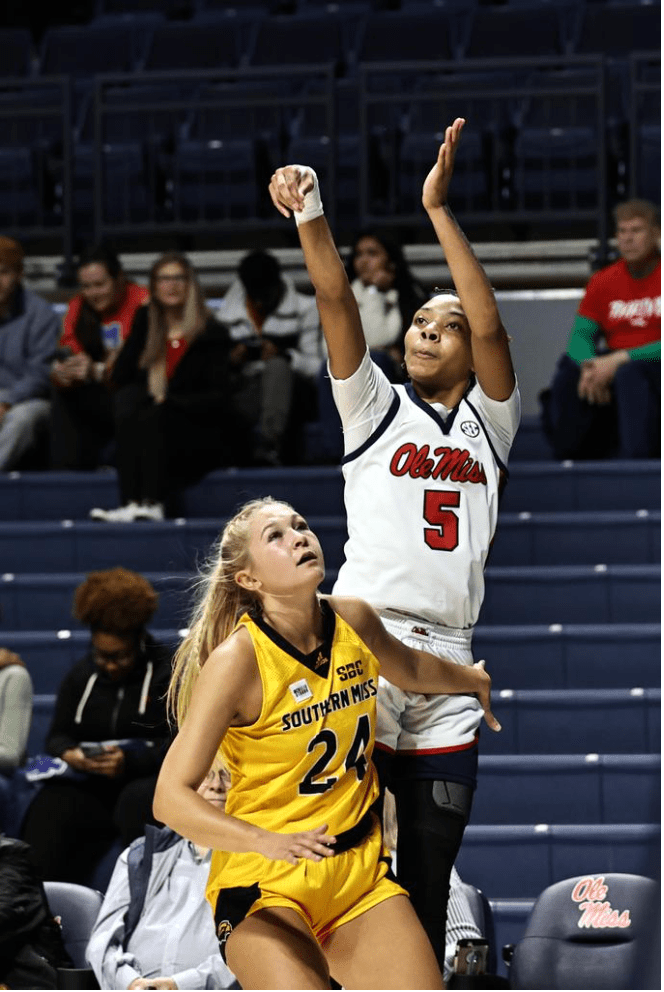 After holding the Southern Miss Eagles to seven points in the first half, the Rebels broke the record for the fewest points allowed in a single half in Ole Miss women’s basketball history in a dominant 92-46 win at SJB Pavilion on Wednesday night.

Overall, the Rebels rained down from the arc, downing nine total three-pointers – the most threes made this season. The Rebels’ 37.5-percent clip from beyond the arc is also a new season-high for Ole Miss.

Defense was the name of the game for Ole Miss, as it forced the Eagles to 25 turnovers that turned into a whopping 43 points. The last time the Rebels forced at least 25 turnovers was Jan. 6, 2022 at Florida.

The Rebel defense came out swinging from the beginning of the game, holding the Eagles scoreless up until the 4:21 mark of the first quarter. During that time, Ole Miss took advantage offensively, ripping off a 14-0 run.

Davis started hot in the first quarter, snagging 10 of her 12 first-half points en route to a perfect first half at 5-of-5 from the field and 2-of-2 from three. Baker was close behind with eight points in the opening frame on her way to a 15-point first half on a 6-of-7 clip.

Going into the second, the Rebel defense didn’t let up as it did not allow the Eagles to score until two minutes left in the quarter. Ole Miss held Southern Miss to seven percent (2-28) from the floor in the first half, and only gave up one point in the second quarter. Meanwhile, the threes rained down for Ole Miss in the second as it shot 42.9 percent from three.

The Rebels headed into the break with a 48-7 lead, the fewest points allowed in a half in program history. Furthermore, the 41-point margin also ranks tied as the fourth-highest scoring margin in a half.

Coming out of the half, Collins secured eight points in the third that pushed her to a new season high of 16 points. A made layup by Davis also put her at a new career high at 16 points. In the frame, Ole Miss shot 50 percent in a quarter for the second time of the night to push them into the final stretch of the game.

In the fourth, Jordan Berry drained a three from the corner to obtain her first career points to put the finishing touch on a record-breaking night for Ole Miss.

Up next, Ole Miss travels down to The Bahamas to compete in the Baha Mar Pink Flamingo Championship from Nov. 21-23. The first game on Ole Miss’ slate is set against Dayton on Nov. 21 at 7 p.m. CT.