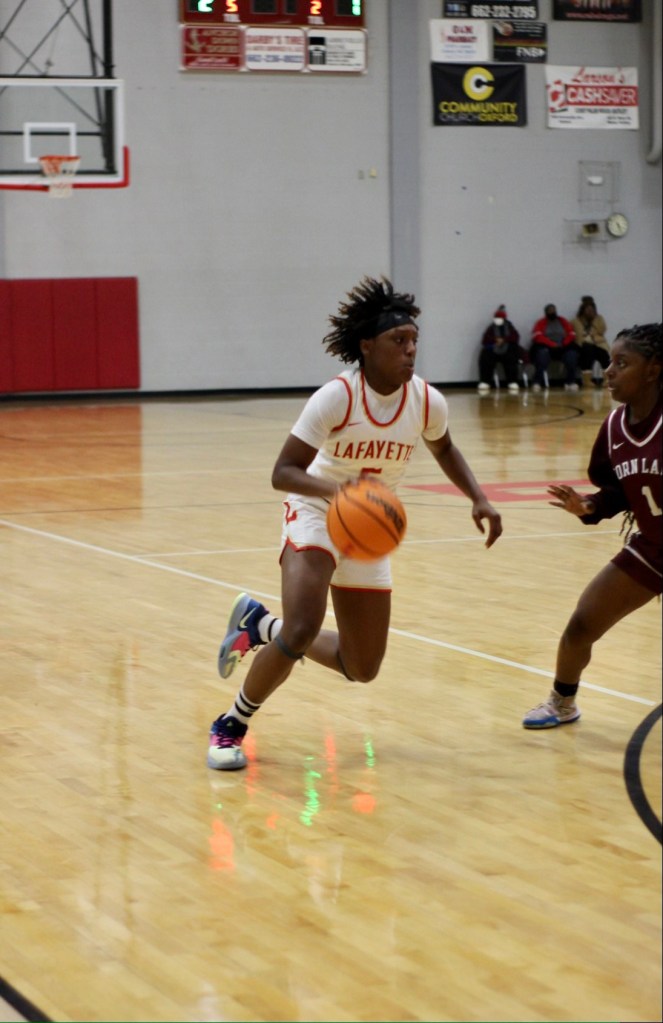 Mariah Reed-Jones (5) drives baseline on a layup attempt in the Commodores' 40-36 win over Horn Lake in Oxford on Thursday, Nov. 17. (Claire Anne Pugh/CMG)

Mariah Reed-Jones pulled down the rebound and immediately turned up court.

The senior guard knew her team needed a bucket as they tried to fend off a late comeback attempt, so she quickly pushed the ball up the court before the defense could set up a trap.

After weaving through a sea of defenders, she found herself in a two-on-one opportunity with teammate Sania Smith streaking down the right wing.

Reed-Jones slowed her dribble, baited the defender into stepping forward and then dumped the ball off to Smith for an easy layup that gave Lafayette a 38-33 advantage in the final minute and effectively put the game on ice.

The Lady Commodores coasted to a 40-36 victory after Horn Lake tried to extend the game by fouling as they moved to 4-2 on the young season.

Head coach Shane Linzy said he was happy his team was able to come away with the victory, but added that their struggles against the Eagles full-court press gave him concerns moving forward.

“They run the same press we run. They run it correctly, we don’t, and we got to see first-hand how it’s supposed to be run,” Linzy said.

The Lady ‘Dores opened up a double-digit lead in the first half before the Eagles broke out the press in the third quarter and quickly turned the game into a slugfest.

Lafayette looked overwhelmed by the press and began forcing long passes over the top of the defense with little success.

“In our press-break we’re supposed to have someone flashing to the middle, [but] they would never show up. Then we tried to make a deep pass but you can’t do that against an athletic team like Horn Lake,” Linzy said. “We kept telling them one of the two guards is supposed to go to the middle and they just weren’t getting there.”

The Lady Commodores were able to settle in late in the fourth quarter as they did just enough to hold off the Eagles’ late comeback attempt.

Reed-Jones was the only player to score in double figures for the ‘Dores, pouring in 10 points in the low-scoring affair.

Lafayette moves on to face Regents at home Tuesday night at 6 p.m.