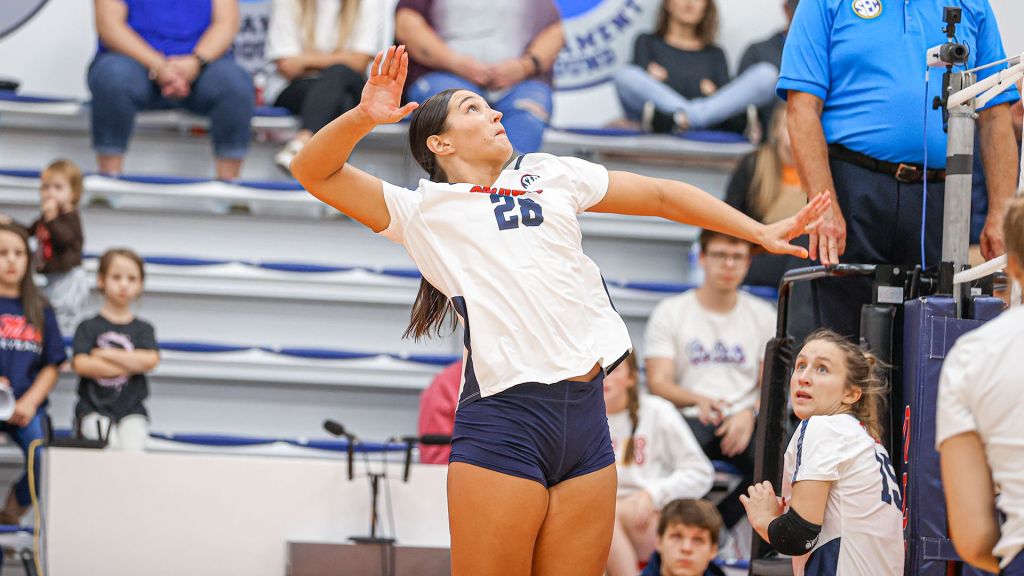 The Rebels (11-14, 7-8 SEC) got off to a hot start but were unable to hold off the Bulldogs (19-7, 10-5), who hit .301 as a team and tallied 10 total blocks. Anna Bair led all attackers with a match-high 15 kills on a .440 clip. Sasha Ratliff and Samantha Schnitta followed in double-figures, finishing with 12 and 11 kills, respectively. Aly Borellis finished a double-double, tallying 39 assists and 10 digs in the effort.

Ole Miss came out swinging and never trailed in the first set. The Rebels built up a 7-3 lead and extended it to five before UGA had seen enough and called timeout. Georgia cut Ole Miss’ lead to one, but a Bair kill and ace restored the cushion and forced the Bulldogs to call their final timeout of the set. It was a battle until the end as the Rebels fended off a late comeback attempt but turned to Bair to side out and Schnitta for the dagger to clinch the opening set.

Georgia responded in set two, jumping out to a 7-2 lead to begin the set. Ole Miss didn’t back down, however. Bair cut the deficit to one at 11-12, but a 3-0 run put the Dawgs up 15-11 at the media timeout. Georgia continued to hold the four-point advantage at 20-16. Out of Ole Miss’ second timeout, back-to-back points cut the lead to two. Georgia called for a break and picked up the final five points to even the match at one set apiece.

After a close set in the early going, Georgia found itself up four points. The Rebels cut Georgia’s lead to two, prompting a UGA timeout. Out of the break, a 10-2 run helped the Bulldogs quickly reach set point. Ole Miss rattled off a few points, but UGA eventually won the set 25-16.

Both teams went back and forth to start the fourth set. Leading by one at 12-11, Georgia took advantage of Rebel miscues to go on a 7-0 run. Ole Miss tried to claw back, but the deficit was too large as the Bulldogs won the set 25-20 and the match 3-1.

The Rebels are back Saturday at 2 p.m. CT with another shot at Georgia.