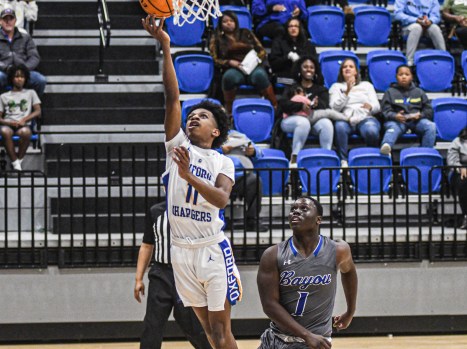 Drew Tyler did not like what he saw from his starters.

The Oxford head coach felt his team was just going through the motions in the opening minutes of their game against Bayou Academy on the first day of the 2022 Charger Challenge, so he pulled all five starters midway through the opening period with his team trailing 7-2.

The all-bench unit immediately made the most of their opportunity as they went on a 19-0 run to close the first quarter with a double-digit lead.

“I thought we weren’t blocking out and were just going through the motions. Second five—they work their tails off, they stay in the gym 24/7 and they gave us more than a spark,” Tyler said.

The run ignited the home crowd, who was stuck in a silent daze through the first few minutes of action but cheered gleefully as the Chargers’ reserves quickly built up a sizable lead.

Oxford extended the lead to 19 just before the half on a three-pointer from junior Julian Buford, who poured in a career-high 15 points off the bench to spark the offense.

“His mechanics are fine-tuned, they’re well-oiled… and that’s his cup of tea—shooting and making three-pointers,” Tyler said. “He puts the time in, and that’s what’s so neat about these guys is if I go to a local gym, they’re already there.”

Buford, who was 1-for-5 from beyond the arc coming into the game, knocked down three triples in the first half en route to the career performance.

He was not the only bench player who made the most of his opportunity however, as junior Kobe Jones also scored in double figures for the Chargers with 14 points.

“When Jones and Buford are making shots like that it really stretches the defense so that D.J. Davis can get to the goal any time because they can’t help off, and that’s what you want. It makes us hard to defend,” Tyler said.

Oxford locked in defensively after the halftime break, surrendering just eight points in the second half as the starters settled in and controlled the action before handing it back over to the reserves late in the third quarter.

Junior D.J. Davis finished with a game-high 17 points in the victory as he continued his stellar run of play early in the season.

The combo guard entered Monday’s contest averaging 23.6 points and 12 rebounds per game after being named First Team All-Region as a sophomore last season.

The Chargers will be back in action on Tuesday when they host Starkville Academy at 6:30 p.m.