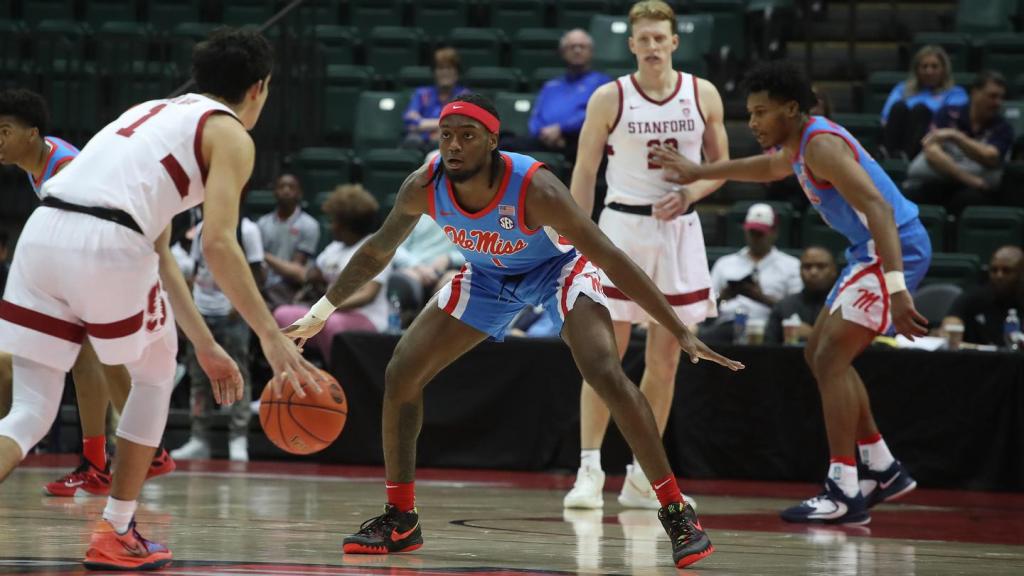 Ole Miss guard Amaree Abram defends Stanford's Isa Silva in the Rebels' 72-68 victory over the Cardinal in the quarterfinals of the ESPN Events Invitational in Orlando, Florida on Thursday, Nov. 24, 2022. (Ole Miss Athletics)

ORLANDO, Fla. – A huge outing from freshman Amaree Abram and some timely shooting helped Ole Miss men’s basketball hang on for a first round victory at the ESPN Events Invitational over Stanford, 72-68, on Thanksgiving Day.

Ole Miss (5-0) never trailed, but Stanford (2I-3) made it interesting late, erasing what was once an 11-point Rebel lead in the second half down to two with just 1:02 to play. But in crunch time, Ole Miss leaned on the freshman Abram, and he delivered a clutch three-pointer on the following possession to put the Rebels back up five with 27 seconds to go. From there, Jaemyn Brakefield (17 points, eight rebounds, three assists) drained four consecutive free throws across the final 16 seconds of action to help Ole Miss keep its edge for the victory.

“Really good win against a very well-coached team. Stanford is going to win a lot of games in the Pac-12 this year,” said Ole Miss head coach Kermit Davis. “I was really proud of our freshman Amaree Abram, he stepped up big. We knew he had it in him. He made a huge shot at the end. It was great to see our front line, Jayveous (McKinnis) and Jaemyn (Brakefield) really had good nights. TJ Caldwell was really limited by his ankle, but showed unbelievable toughness for a young guy to play. And for us to do this with Matthew Murrell fighting foul trouble, that speaks volumes for our team.”

Abram – an ESPN Top-100 signee from Port Arthur, Texas – more than doubled his career-high, dropping 26 points on 12-of-18 shooting and a perfect 2-of-2 showing from beyond the arc. Those 26 points are the most scored by a Rebel this season, as well as the most by an Ole Miss freshman since Blake Hinson scored 26 at Mississippi State on Jan. 12, 2019.

“(Abram) just got into a really good rhythm,” Davis said. “He’s got a really good mid-range game, and he got it going shooting it from three. He was playing with a lot of confidence. I thought he played with a good pace today.”

Abram’s heroics were doubly important on Thursday, as Ole Miss’ top scorer Matthew Murrell (six points, four assists) was in foul trouble throughout the game – eventually fouling out for the first time in 92 career games played with 2:13 to play. Murrell, who led the SEC in minutes entering the game, played a season-low 21 minutes after three early fouls in the first half forced him to the bench.

“I knew I had to play a big part with (Murrell) being out,” Abram said. “I just knew we needed buckets, and I needed to make plays for the team.”

Abram had the first bucket of the game, the first of his 12 field goals on the day, but it was Brakefield who took command for Ole Miss early, scoring seven of the Rebels’ first 13 points. Stanford pulled to its lone tie of the game at 16-16 with 9:06 to go in the first half, but a 9-2 Rebel run from 7:21 to 2:55 helped Ole Miss separate to its eventual 29-22 lead at the break. Those 22 Stanford points are the fewest points allowed in a half by the Rebel defense since holding Florida to 21 first half points on Feb. 5, 2022.

Ole Miss ended the half with two in double digits for the first time this season, as Abram had 12 of his 26 and Brakefield 10 of his season-high 17.

The second half belonged to Abram and senior Jayveous McKinnis, who scored 12 of his Ole Miss career-high 15 points in the back frame. McKinnis brought the energy right out of the break with a thunderous alley-oop slam, followed by another dunk by Myles Burns (four points, seven rebounds, four assists, two steals).

Ole Miss was able to hover around an 11-point lead by as late as 8:13 to go in the game, but Stanford began to chip away – particularly from the free throw line. An 8-0 Cardinal run from 2:38 to 1:02 brought the Ole Miss lead down to just 65-63, and half of that came from the charity stripe. But the Rebels responded immediately, with Abram’s clutch three and Brakefield’s crucial four straight free throws sealing the win.

Ole Miss is now 5-0 for the first time since 2013-14, with that Rebel squad opening the season at 6-0 before its first loss. Up next, the Rebels head to the first semifinal of the ESPN Events Invitational, with a matchup against Siena awaiting Ole Miss on Friday morning. Tipoff is set for 10 a.m. CT on ESPN2.

“The beauty of our team is the depth,” Davis said. “It’s going to be different on different days from different players, both in this tournament and as the season goes on.”