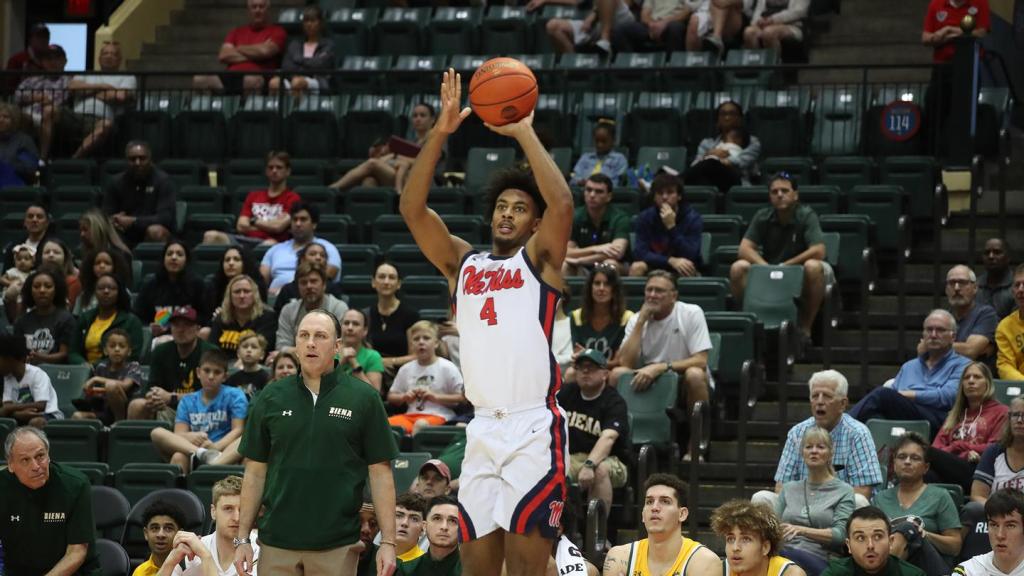 ORLANDO, Fla. –Ole Miss men’s basketball continued its second-half heroics, bouncing back from a halftime deficit behind a brilliant shooting effort in the back half to take down Siena, 74-62, in the ESPN Events Invitational semifinal on Friday morning.

With the victory, Ole Miss improves to 6-0 for the first time since 2013-14 and advances to Sunday’s title game against tonight’s winner between Oklahoma and Seton Hall.

The Rebels trailed the Saints (3-3) by one at halftime after a fierce first half from Siena that featured 10 lead changes and two ties. However, Ole Miss regained the lead on its first bucket of the half and never relinquished it back, riding a season-high 62.5 percent shooting effort in the second half on the backs of huge days from Jaemyn Brakefield, Amaree Abram and Matthew Murrell. This season, Ole Miss is outscoring opponents in the second half by 51 points, helped today by a 48-35 edge.

On the day, Ole Miss shot 50 percent overall, the first time the Rebels have hit half of their shots in back-to-back games since the beginning of last season against New Orleans (.531) and Charleston Southern (.507).

“I knew we would get a great shot from Siena,” said Ole Miss head coach Kermit Davis. “They’re very well-coached, they’re playing really well right now and they came out with a lot of energy. I’m really proud of our team. We knew it was going to be that kind of game. You can see all the scores in college basketball, there’s a lot of close scores no matter what the teams are. I thought our team really played well in the second half.”

Abram (19 points), Brakefield (17 points) and Murrell (14 points) combined for 50 of Ole Miss’ 74 points on the day, but were particularly effective in the second half, scoring a combined 37 of Ole Miss’ 48 back half points.

Brakefield got the crowd energized with a thunderous coast-to-coast dunk with 13:55 to go in the game to push the Ole Miss lead into double-digits for the first time. The Jackson, Mississippi junior scored 17 points for the second straight game in Orlando, and overall for the tournament he is shooting a total clip of 14-of-20 and 3-of-6 from beyond the arc. This season, Brakefield leads the Rebels with a 64.6 percent mark from the field.

“(Brakefield) cares so much. I’m so excited for Jaemyn,” Davis said. “You can’t imagine how many hours he’s put in this gym since last year. His conditioning is elite. I don’t think I took him out in the second half. He can play all day.”

Abram was excellent for the second straight day as well after blowing up for a career and Ole Miss team season-high 26 points against Stanford on Thursday. Abram ended today’s game against Siena with 19 points and a perfect 3-of-3 line from three-point land – with 16 of those points coming in the second half.

Senior Myles Burns was crucial for the Rebels, both in ways that do and do not show up in the stat sheet. Burns put together another game as Ole Miss’ do-it-all utility man with six points, six rebounds, five steals and three assists – his second game this season with five steals. Burns made arguably the highlight of the day after a turnover of his own, chasing down the ball the entire length of the court and leaping in full-extension to knock the ball out of bounds and prevent the fastbreak bucket.

“That’s just who (Burns) is,” Davis said. “That’s why he plays the minutes he plays. He can affect the game in so many areas. He’s used to winning. He was 36-0 last year as a player (at Loyola New Orleans), and he’s undefeated this year. He impacts winning in a lot of ways that coaches love.”

Up next, Ole Miss will face the winner of tonight’s Oklahoma-Seton Hall semifinal in Sunday’s title game of the 2022 ESPN Events Invitational. Tipoff on Sunday is set for 12:30 p.m. CT on ESPN.