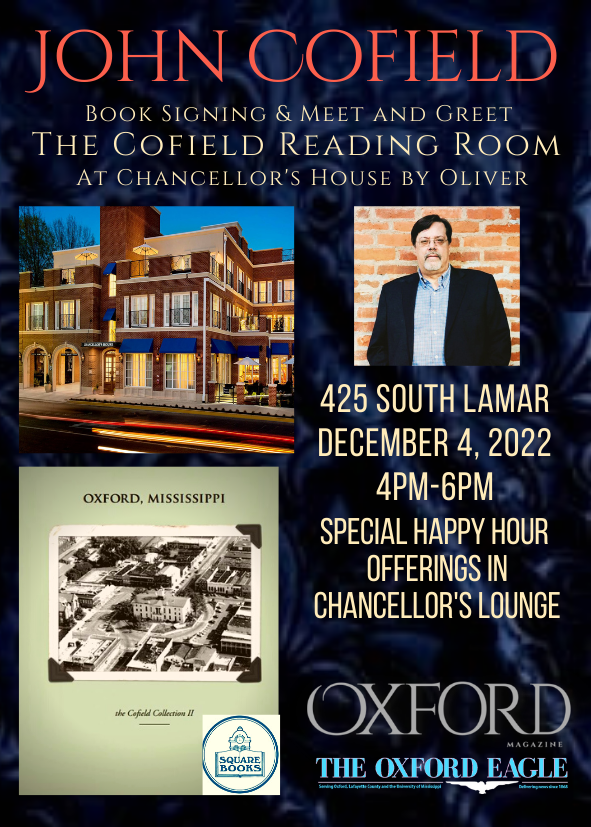 Author John Cofield returns to The Cofield Reading Room at Chancellor’s House hotel for a second Oxford book signing of his second edition, Oxford, Mississippi: the Cofield Collection II. The book showcases “Old Oxford” through the lenses of his father Jack and grandfather J.R. “Colonel ” Cofield.

The book also includes iconic images courtesy of legendary photographers Ed Meek, Milly Moorhead West, Deborah Freeland, David Rae Morris and countless others. The first edition of his collection was an immediate bestseller at Square Books when it hit shelves in 2017, allowing readers an inside look into an Oxford of the past.

This special event will be held at The Chancellor’s House Hotel by Oliver located at 425 South Lamar Blvd on Sunday, December 4. Doors open at 4:00 p.m., with a special happy hour provided by the hotel in the Chancellor’s Lounge. John will also share some stories and be available for a brief meet and greet and book signing. Books will be available for purchase courtesy of Richard Howorth/Square Books.

John grew up in Oxford as the son of Jack Cofield and grandson of Colonel Cofield, both of whom served at The University of Mississippi as official photographers. In addition to their work at Ole Miss, they served as William Faulkner’s “official” photographers. Through their close friendship with Mr. Faulkner, the Cofields were able to amass a body of work that is known as “The Cofield Collection”.

In 2018, Chancellor’s House’s Clifton Clements Odom was granted permission to exhibit images as well as Colonel Cofield’s 1927 camera, an oil portrait of Faulkner, and a signed photo of Mr. Faulkner. This was due in large part to the efforts of John’s brother, the late Glenn Cofield.