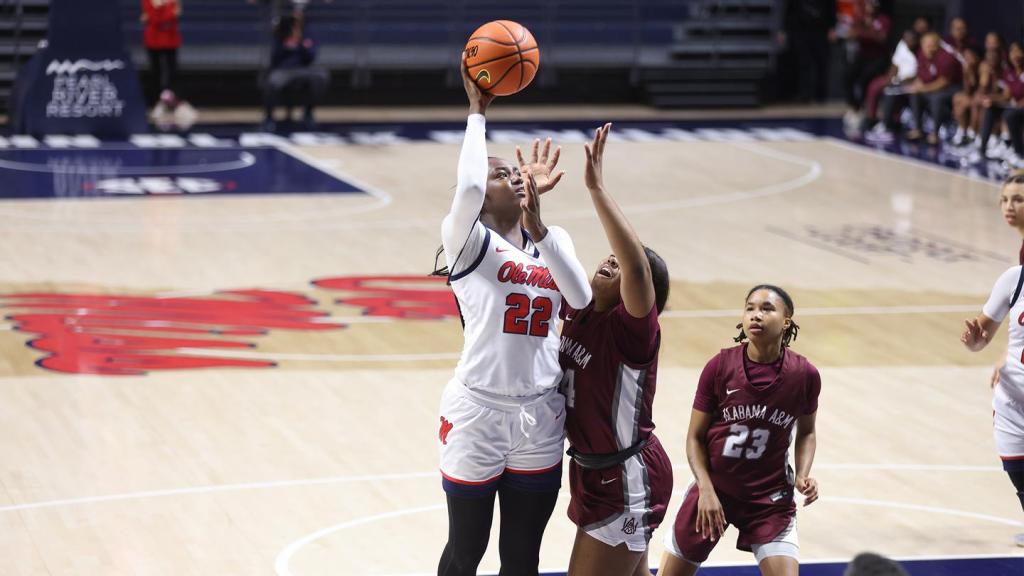 The Rebels (7-1) never allowed the Bulldogs (0-6) to break double digits in a single quarter this evening, thus breaking the previous single-game record for fewest points allowed set by Mississippi Valley State back on Dec. 28, 2016 in a 67-30 victory for Ole Miss. The Rebels also held Alabama A&M to zero players in double-digit scoring tonight, the first time since that same MVSU game back in 2016.

“We have a lot of length on the perimeter, so I love the fact that we were active,” said Ole Miss head coach Yolett McPhee-McCuin. “We did a really good job of just eating up the space with our size and our length, and it made it difficult for Alabama A&M to get some shots off. That’s pretty much what we did, and then defensively even though we were in our 2-3, we were still active and still able to get some steals and some fastbreak points because of it.”

Alabama A&M knocked down a three at the 8:54 mark of the first quarter to briefly take a 3-2 lead, but that would be its last points scored for the next 6:17 of game time and its last field goal of the quarter as Ole Miss took command of the game and never gave it back. The Rebels surged right after that three-pointer with a 12-0 run, half of which came from three buckets by Marquesha Davis (eight points). Ole Miss shot 50 percent in the opening frame, one of two 50 percent quarters en route to a 45.5 percent shooting night overall.

In the second quarter it was more of the same from the Ole Miss defense, which stuffed the Bulldogs to just 3-of-12 in the quarter – ultimately shutting down Alabama A&M to just 4-of-22 (.182) from the field and 1-of-3 (.333) from three in the first half. Elauna Eaton led a balanced scoring attack for Ole Miss in the quarter, scoring all six of her points on two trifectas during an 8-0 Rebel run and helping the Rebels gain a 22-point lead at halftime at 36-14.

The largest run of the game actually spanned the first and second halves, with Ole Miss closing the second quarter on a 7-0 burst and opening the third on an 11-0 stretch spurred on by two back-to-back Madison Scott layups. It was another excellent outing for the Rebel junior, who ended with 11 points, 10 rebounds and a career-high five assists while charting her second straight double-double and her third of the season.

Tyia Singleton (10 points, seven rebounds, three steals, three blocks) recorded two of her three blocks in the opening minutes of the third quarter, during which the Rebel defense almost completely shut down Alabama A&M to just 1-of-16 (.063) from the floor.

However, the third quarter belonged to Ole Miss junior Snudda Collins, who exploded for four of her five three-pointers of the night to give the Rebels a comfortable 41-point lead by quarter’s end. Collins ended the night with a season-high 22 points on 5-of-8 shooting from behind the arc, tying her career-high in three-pointers made.

“Snudda lives in the gym,” McPhee-McCuin said. “I’m really glad that the basketball gods have repaid her, and she was just able to be comfortable and shoot the ball. She took good shots tonight, and I think that was the difference in her being able to make more than less.”