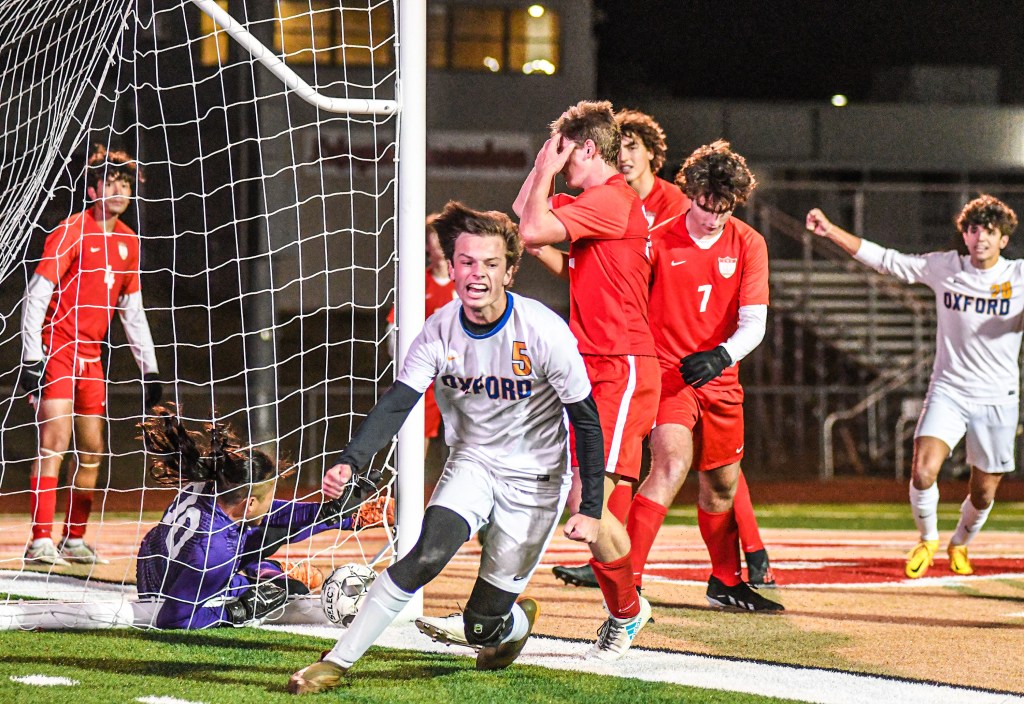 Oxford’s Andrew Atchley (5) scores on a header off of a corner kick in the 57th minute against Lafayette in boys high school soccer in Oxford, Miss. on Thursday, Dec. 1, 2022. Oxford won 3-1. (©Bruce Newman)

The Oxford boys soccer team secured a key victory on Thursday when they knocked off crosstown rival Lafayette 3-1 for their fourth consecutive victory.

The Chargers (6-2) were on the offensive all night, pushing the ball out to the wings effectively and playing most of the match in the attacking third.

Lafayette (8-2) managed to get one against the run of play however as Wesley Kilpatrick weaved through defenders along the left wing before whipping in a low cross to Porter Lindsay who calmly redirected it past the keeper to give the Commodores the lead with just over 16 minutes remaining in the half.

Oxford answered right back however, as a long throw-in pinged around the box for a few moments before falling to the feet of Everhett Van Every who buried the equalizer in the back of the net.

The two squads entered the halftime break locked in a 1-1 deadlock, but Oxford got on the board quickly in the second half when Carson McCready picked out Andrew Atchley on the far post on a corner kick and lofted a beautiful ball in that curled right to Atchley’s head before being smashed into goal.

The Chargers remained on the attack throughout the second half, pushing the ball forward and controlling the action in the midfield despite having a one-goal lead in hand.

“We just wanted to keep pushing. We wanted to try to continue to control the midfield but kind of overload those flanks on the side,” said Oxford head coach Hunter Crane. “We sent those outside backs a little more forward than we were sending them in the first half, just trying to get some overloads in there and that was working.”

Oxford’s relentlessness paid off when John Love was fouled from behind in the box, forcing the referee to point to the spot with just over 10 minutes to go in the half.

Van Every calmly stood over the ball before blasting it past the keeper to extend the lead and effectively put the game on ice.

“The Crosstown Classic is an emotional game for everybody, a lot of these kids grew up playing against each other… so it was a big win, we were excited to get it,” said Crane. “It was pretty physical, and we usually don’t stack up very well with physical teams but tonight we did. We came out and played physical with them as well.”

The loss snapped an eight-game winning streak for Lafayette, whose last loss came in their opening match of the season against Tupelo on Oct. 27.

The Commodores went unbeaten in the month of November, but must now try to bounce back after an emotional loss to their crosstown rival.

“There’s always bigger teams on your schedule and Oxford is one of them, Tupelo is one of them — I thought we played them really well. We have DeSoto Central and Hernando in the month of January so I think there’s games that we’re in that are kind of tests for us,” said head coach Gene Anderson. “You know that those bigger tests are games that you’re in but they can definitely go the other way as well so you just shake it off and keep doing what you’re doing.”