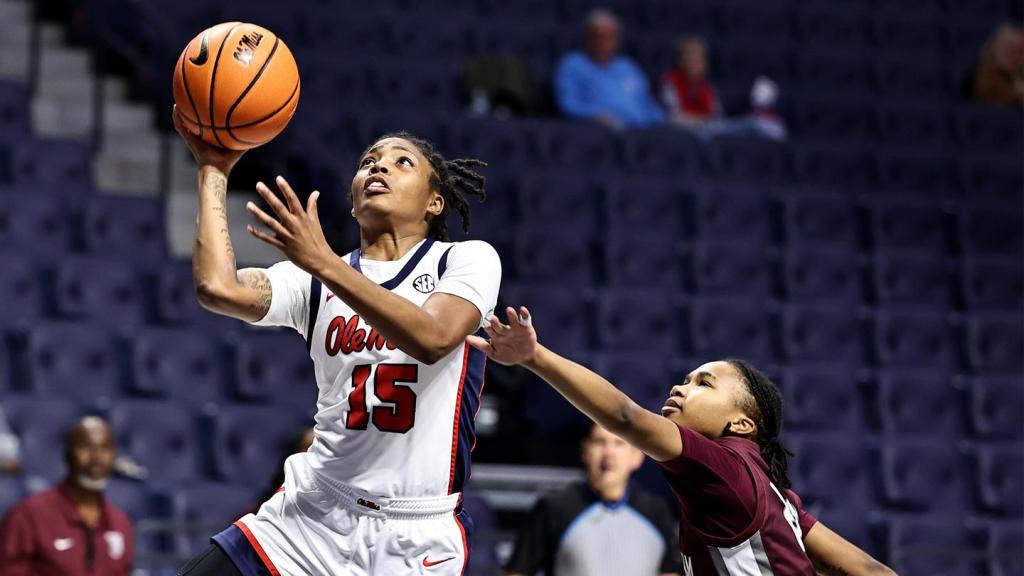 NORMAN, Okla. – In a big road test for the Ole Miss women’s basketball team, the Rebels fell short to No. 23 Oklahoma after a defensive battle on Sunday afternoon in Norman, Oklahoma, 59-69.

Ole Miss (7-2) forced 19 turnovers against the Sooners (7-1) but was unable to control the Oklahoma offense. It was a high-attempt shooting game from both sides of the court with both teams putting up over 60 shots from the field.

Leading for Ole Miss, Angel Baker secured 22 points, shooting 50 percent from the field. Baker brought down a season-high of nine rebounds, eight of them being defensive.

From the arc, Snudda Collins locked in back-to-back games with five threes. Collins’ five competitions from beyond the arc tie her season high for the third time this year.

On the offensive side of the ball, Ole Miss trailed for the majority of the first, but two consecutive completions from the far line for Collins tied the game back. A put-back at the buzzer by Tyia Singleton put the Rebels in the lead at 16-14 at the end of the first quarter.

The Sooners did not stay down long, going on a 9-0 run to start the second quarter. Ole Miss was sparked by an Elauna Eaten three to put them at the half with an eight-point deficit at 28-34.

Coming out of the half, a made layup by Rita Igbokwe got the Rebels rolling. Two back-to-back threes made by Baker and Collins gave Ole Miss a 6-0 lead right out of the half and tie the game back up. Igbokwe secured four of her six points in the third.

Another bucket from the arc by Collins put Ole Miss down by three at the end of the third quarter and looking towards the final 10 minutes gain the ball back on its side.

In the fourth, Myah Taylor drove the ball down for a layup to take the lead for the first time since midway in the second quarter. However, the Sooners responded back quickly and went on an 11-0 run in some of the final minutes of the game to secure the 69-59 win.

The Rebels have a week-long break before returning home at the SJB Pavilion on Sunday, December 11, where they will face off with Jacksonville State a 1 p.m. CT. The game is scheduled to be broadcasted on SEC Network.