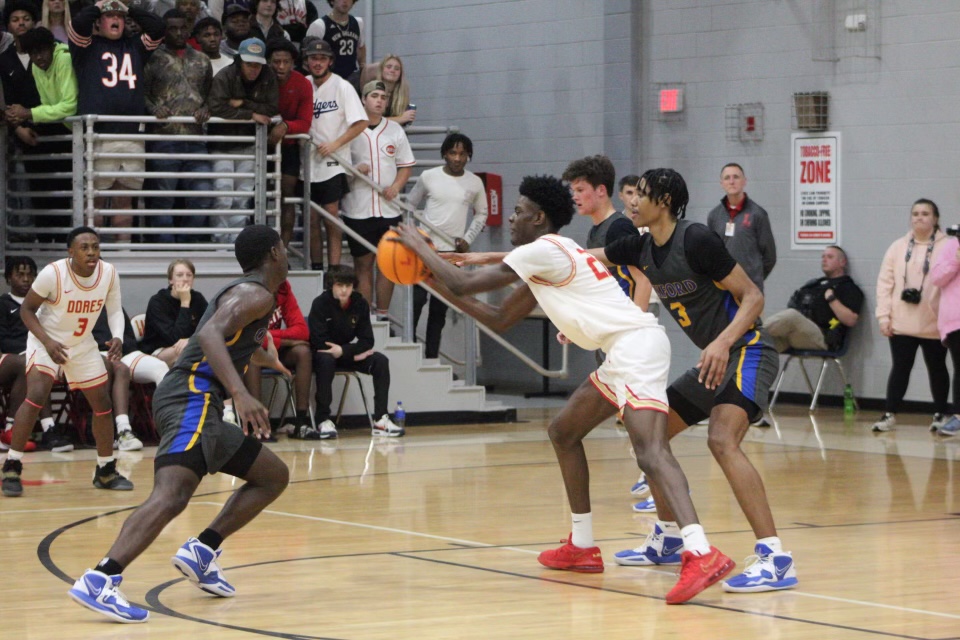 As D.J. Davis dribbled near the halfcourt line he knew he needed to make a play.

The junior guard had just given up a corner three that cut Oxford’s lead to seven with just over four minutes remaining in their Crosstown Classic clash with Lafayette, and now calmly stood examining the defense as he looked for an opportunity.

Oxford had failed to make a single shot from the field in the first four minutes of the quarter, so they spread the floor and let Davis go to work in hopes that he could get to the rim and finish or kick to an open shooter.

Isolated at the top of the floor, Davis slowly drifted to his left before his defender stepped up to pressure the dribble.

The 6-foot-2 combo guard pounced like a tiger lurching for prey, goading the defender into closing the space with a hesitation dribble before launching into a drive.

He easily beat the primary defender, slithered past the help defense and glided to the rim for an easy layup that put Oxford up by nine.

The junior standout was not done there however, as he quickly got a steal on the other end before coasting to the basket for another easy bucket that pushed the lead back out to double digits in the closing stages of the game.

He finished with a game-high 23 points as the Chargers cruised to a 50-37 victory in the first hoops edition of the Crosstown Classic this season.

Oxford Head coach Drew Tyler said he was proud of the way his star guard settled in and attacked the rim after an uneven start to the game.

“Early in the game he was settling and shooting some rangy shots,” Tyler said. “Last year, in the Lafayette game, he didn’t really calm down until the fourth quarter. Tonight, pretty much midway through the first quarter he figured out ‘alright I can get to the goal.'”

Lafayette played some of their best basketball of the season in the defeat, playing as a cohesive unit on defense and scrapping for buckets on offense against an Oxford team that was bigger, faster and more skilled across the board.

Head coach Hunter Mason said his team’s goal was to limit easy looks and ensure that Oxford had to fight and claw for every basket.

“We talked all day about how there ain’t no drill in practice that we do that’s easy, so why would we let someone come into our gym and get anything easy?,” Mason said. “I think the guys really bought into that, and they’re buying into the mentality of ‘next man up’ because we’re dealing with some injuries right now to some guys that play a whole lot of minutes for us but you can’t tell that they’re not here because guys are stepping up for us.”

The loss dropped the Commodores to 1-9 on the season, while Oxford improved to 8-1 after suffering their first loss of the season on the road against Lewisburg on Tuesday.

The Chargers travel to Jackson Academy on Saturday for a matchup with the Raiders. Lafayette moves on to face Water Valley at home Tuesday night.