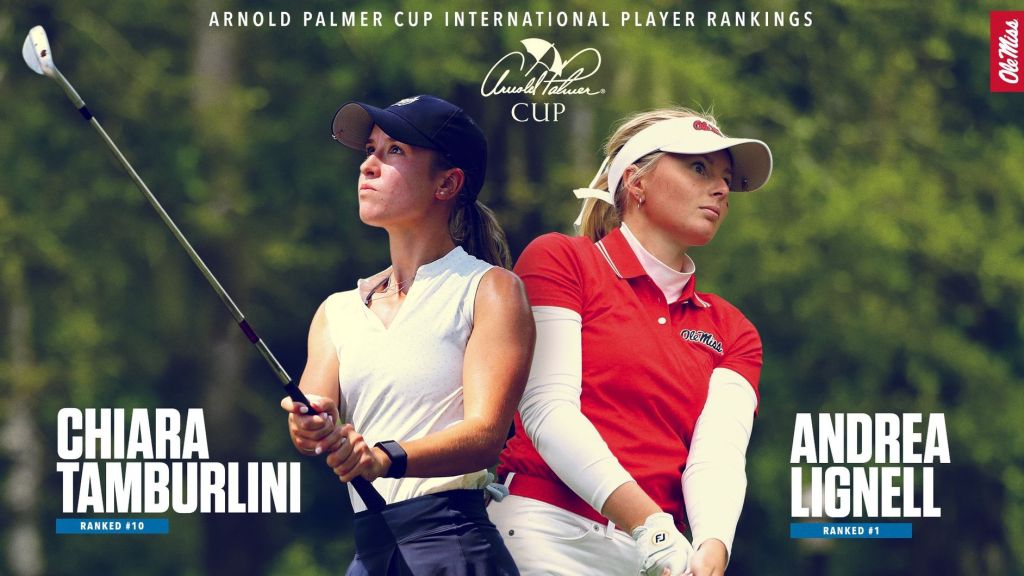 Ole Miss women's golfers Chiara Tamburlini and Andrea Lignell came in at No. 10 and No. 1, respectively in the first Arnold Palmer Cup Rankings of the year. (Ole Miss Athletics)

NORMAN, Okla. – Two Ole Miss women’s golf seniors found themselves at the peak of the first Arnold Palmer Cup Rankings of the year, with Andrea Lignell and Chiara Tamburlini both earning spots in the top 10 of the international rankings, the Women’s Golf Coaches Association (WGCA) announced Thursday.

Lignell sits atop an extremely talented international pool of players, ranking as the No. 1 overall women’s international player through the fall season. Tamburlini slots in just a few places behind Lignell, earning a spot at No. 10 overall.

The annual tournament, held this year in Townsend, Tennessee, features both men’s and women’s collegiate golfers from the United States facing off against their international counterparts in a team competition. Team USA currently leads the all-time series 13-12-1.

The top six golfers from the spring’s final ranking from both the United States and International men and women will be among the individuals selected to compete in the Palmer Cup. The remaining six spots for each team will consist of five committee picks and a coaches pick.

This marks the first time Lignell has found herself in the Palmer Cup Rankings in her college career, as well as the first time in program history that a Rebel has ranked No. 1 overall for their respective team.

Lignell was on fire for the Rebels to open up the 2022-23 season, with the Gothenburg, Sweden, native capturing her first two collegiate tournament wins at the Cougar Classic and The Ally. Lignell went on to finish in the top three of all four of the team’s fall tournaments, shooting a stroke average of 69.50

A total of 11 out of Lignell’s 12 rounds played this fall were under par, with seven of those rounds being in the 60s. This already ties her for fourth all-time in program history for most rounds under par in a single season.

Tamburlini will be aiming to appear in her second consecutive Palmer Cup after earning a spot at No. 10 in the international rankings, with Tamburlini having helped lead the International Team to a 33-27 victory over Team USA in the 2022 Arnold Palmer Cup in her home country of Switzerland.

The defending 2022 First-Team WGCA All-American has been on a tear for the Rebels, grabbing top 10 finishes in her past seven tournaments dating back to the 2022 Gator Invitational in March. Tamburlini also holds a streak of 15 straight top 20 finishes, a stretch that began at the 2021 NCAA Championships.

The 2023 Arnold Palmer Cup is currently set to run June 8-10 at Laurel Valley Golf Club, with details on TV coverage to be announced at a later date.