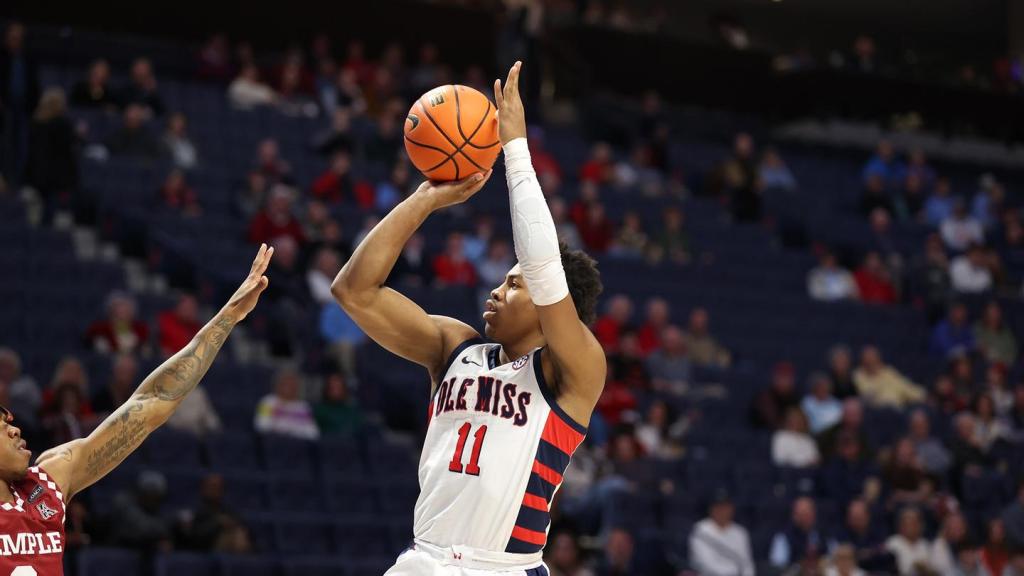 Setting a season high with 46 rebounds while holding their opponent to their lowest field goal percentage on the year, the Ole Miss men’s basketball team defeated Temple in the SJB Pavilion on Saturday 63-55.

The defenses shined early as the Rebels (8-3) and Owls (6-6) missed a combined nine shots before the first media timeout, with the home team owning a 4-3 lead through the first four and a half minutes of action. Later in the opening half, Temple took a 17-9 lead on Ole Miss with 8:14 before the midway break, the largest deficit the Rebels faced on the evening. After Ole Miss pulled within one point on a pair of free throws from Daeshun Ruffin with six seconds before the halftime buzzer, the visitors were able to add a last-second layup to lead 27-24 at the break.

“In the first half, give Temple credit, I thought they came out and played really hard,” said Ole Miss head coach Kermit Davis. “We had numbers on the break and couldn’t make the right decision, charged or fumbled it, and Matt had some really good step-in shots he usually makes. In the second half, we got in a better flow.”

A thunderous dunk early in the second half by Jayveous McKinnis made it a one-point game once more at 29-28 in favor of the Owls. Minutes later another big slam by Ole Miss, this time an alley-oop from Ruffin to Matthew Murrell, tied the game at 35-each with 13:51 left in the game.

The two teams traded blows, with a pair of ties and six lead changes over the next six minutes. With just under eight minutes on the clock, Ruffin scored down low to put the Rebels up 44-42. Ole Miss would remain on top for the remainder of the game, with the backcourt duo of Murrell and Ruffin accounting for 15 of the final 21 points. Key plays down the final stretch by McKinnis, with blocks at 4:55 and 0:33 on the clock, and Myles Burns, with two key offensive rebounds and a strong layup through a foul in the closing seconds, kept Ole Miss in the driver’s seat.

“It was really good to see Deashun settle in and play a clean game with 17 points, four assists and no turnovers,” said Davis. “I thought he and Amaree Abram guarded better at the point guard spot, and I thought Matt did a great job on Battle. He really wanted to guard him and Battle is an elite guard in college basketball.”

For the seventh game this year, Murrell led the Rebels in scoring with his fourth game of 20 or more points (21), while Ruffin chipped in 17 to go with four assists. Myles Burns helped the Rebels pull down a season-best 46 total rebounds as a team with 12 to his name, the most boards in a game for Ole Miss since Luis Rodriguez had 13 last February.

A big defensive effort by Ole Miss from McKinnis and Theo Akwuba (three blocks each) among others, held Temple to 29.8% shooting from the field (24.1% in the second half), as the Rebels held their opponent to under 30% shooting from the floor for the first time since December 16, 2020 against Middle Tennessee (29.8% as well).

“It was a hard-fought game, kind of a game like some of the SEC ones will be,” said Davis. “I really liked our effort, we didn’t turn it over but twice in the second half so it’s a good win and we look forward to one more before the break.”

The Rebels will play their final non-conference game at home next, hosting North Alabama on Tuesday, December 20 at 2 p.m. in the SJB Pavilion and on SEC Network+.