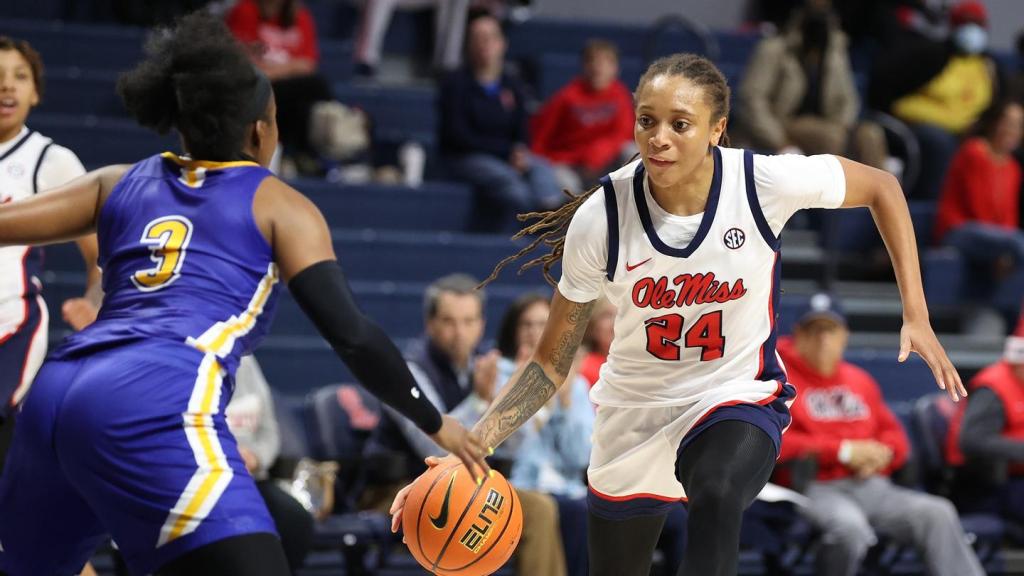 In Ole Miss women’s basketball final home game of its non-conference season, the Rebels came out with a win against the McNeese State Cowgirls, 79-60, on Saturday at SJB Pavilion.

Madison Scott was the sharpshooter of the day, securing her fifth double-double of the season and second in a row with 18 points and 10 rebounds. The junior went 5-of-8 from the field while shooting 8-of-9 shots at the free-throw line and adding five assists to the mix. This is Scott’s sixth time this season to be in double-figures in scoring.

Ole Miss (10-2) also had two additional Rebels in double-digits with Snudda Collins and Marquesha Davis both adding 14 points. Davis went 5-for-7 on the day while shooting flawlessly at the line. Collins drained two threes while grabbing six points from free throws. This marks Collins’s eighth time in double-figures this season.

The Rebels had a bonus on the line as they added 26 points from free throws.

Starting out the game in the first, McNeese (3-7) didn’t hold back as it took the early lead. There were two lead changes and five times the game was tied through the first. Ole Miss shot perfectly on the line, downing 8-of-8 free throws. Heading into the second, the Rebels were falling behind the Cowgirls, 14-21.

However, the Rebels were quick to respond in the second. The Ole Miss defense held McNeese State to a dominant 7.1 shooting percentage, only allowing four points from the Cowgirls. During the second quarter, a steal by Collins led to a fast break layup for Scott to get her in double-digits. Ole Miss led at the half 34-25, coming back from its seven-point deficit in the first.

Coming out of the half, two threes in the beginning minutes of the half made by Collins and Angel Baker got the Rebels rolling in the third quarter. Ayanna Thompson drained one from deep, while Collins dropped another one from behind the arc to put her into double-figures. Overall, the Rebels went 4-of-6 from deep in the third.

In the final 10 minutes of the game, Ole Miss went on an 11-0 run to give the Rebels the 79-60 win and complete a perfect record at home for its non-conference season.

Up next for Ole Miss, the Rebels will hit the road to close out their non-conference season on Wednesday, December 21, at Temple in Philadelphia, Pennsylvania. The game is set with an 11 a.m. CT tipoff on ESPN +.