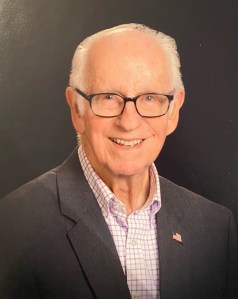 John Frank Arrechea, loving husband and father of three children, passed away peacefully on Monday, December 19, 2022, at the age of 94 at home in Oxford, MS.

John was born in Tampico, Mexico on November 3, 1928 to Juan Jose Arrechea and Mary Elizabeth Comley Arrechea. He spent his early years in the Hill Country of Texas as the youngest of two children. He enjoyed returning to Texas often to reminisce about his life on the ranch with his horse, sheep and cattle.

He volunteered and joined the US Air Force in 1948 and was stationed in Puerto Rico and Yokota AFB in Japan. He served as ground crew on B-50 aircraft during the Korean War and was discharged in 1952.

A final move to Oxford MS in 1972 and a position as USDA Forest Service Project Manager for the Yazoo-Little Tallahatchie Flood Prevention Project completed his job hunting and ended his search for the perfect small town to raise his children. John retired from the USDA Forest Service in 1985.

He came out of retirement when he was approached about teaching a forestry program on the college level. He initiated and was responsible for all functions of the Forest Technology Program at Holmes Community College in Grenada, MS and taught all seven forestry courses from 1887-1994.

On January 2, 1960, he married the love of his life, Lois Marie Miller of Mena Arkansas. They were blessed with twin boys, taken too soon to live with God. They were also blessed with two daughters, Sarah and Katherine and a son, Joe.

Fun family times included pulling a pop-up a trailer from state park to state park every summer all the while teaching his young family about hard work, nature, fresh air, campfires, and starry skies.

Another one of John’s hobbies or labors of love was growing Christmas Trees. In 1978 he bought a tree farm south of Oxford and planted his first crop of Christmas tree seedlings in 1982. The Springwood Christmas Tree Farm sold hundreds of trees and brought thousand of smiles to young and old for 28 years.

Beginning in 1972, John performed as Oxford’s Town Clown. He dressed as his favorite clowns, Emmett Kelly and Otto Griebling, performing silently but with a huge smile on his face in over 65 parades and 140 miscellaneous appearances. He especially loved parades, finding a school band, and listening to the rolling snare drums that gave him the needed adrenaline to shuffle and sashay from side to side as he waved to smiling faces along the parade route.

He always strived to put a smile on other people’s faces.

The family wishes to extend their sincere appreciation and gratitude to Enhabit Hospice for the wonderful care and kindness shown to their husband and father.

In lieu of flower, the family request donations be made to: St. Andrews Methodist Church Pantry, P.O. Box 6, Oxford, MS 38655.

Waller Funeral Home is in charge of arrangements. For more information please call 662-234-7971 or visit www.wallerfuneralhome.com.