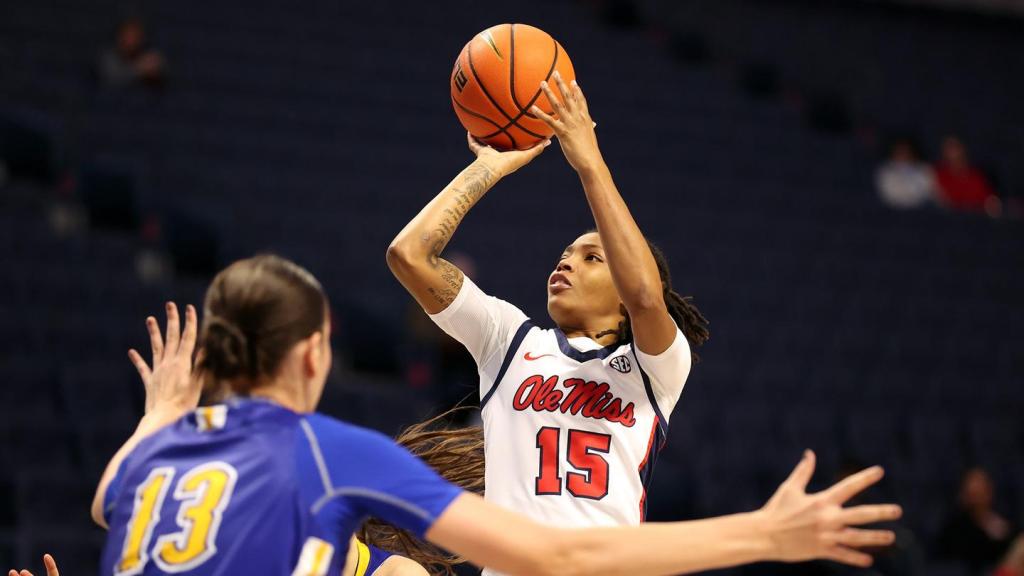 The Rebel offense was wide awake even on the morning road slate with four players in the double-figure category. Tyia Singleton (16), Madison Scott (16), Angel Baker (14), and Marquesha Davis (10) all gained 10-plus points for Ole Miss.

In the first quarter, Ole Miss didn’t waste any time going on an 8-0 run to start out the game. The first points of the matchup were by Davis from deep on the arc to get the Rebels starting out strong. Ole Miss shot a season-high 78.6 field goal percentage while holding Temple to only nine points (3-16) in the first.

In the second, Baker took over the court going a perfect 3-of-3 on the floor to grab six points and three rebounds on the defensive end. Her layup at the buzzer put her in double figures heading into the half. Overall, Ole Miss put up 12 points in the paint in the second.

At the half, Ole Miss led 44-25 against the Owls. Three Rebels were already in double-digits to give Ole Miss its highest first-half field goal percentage of 63.3 percent. This is the first time this season that Ole Miss has had three players already with 10-plus points at the half.

In the third, Scott secured an and-one on a hard layup to be the fourth Rebel with plus-10 points. This is Scott’s seventh time this season to be in double-figures and her third straight game. Ole Miss forced Temple to a four-minute scoring drought while forcing nine turnovers in the third to give them a 24-point lead heading into the final minutes of the game.

Ayanna Thompson drained a three from the arc to start out the fourth quarter and put the final bow on top of Ole Miss’s fourth straight win, 75-55.

The Rebels will take eight days off for the holiday season before opening conference play with Auburn at home. The Tigers will come to Oxford on Thursday, Dec. 29 for a 6 p.m. tip. The game will be streamed on SECN+.