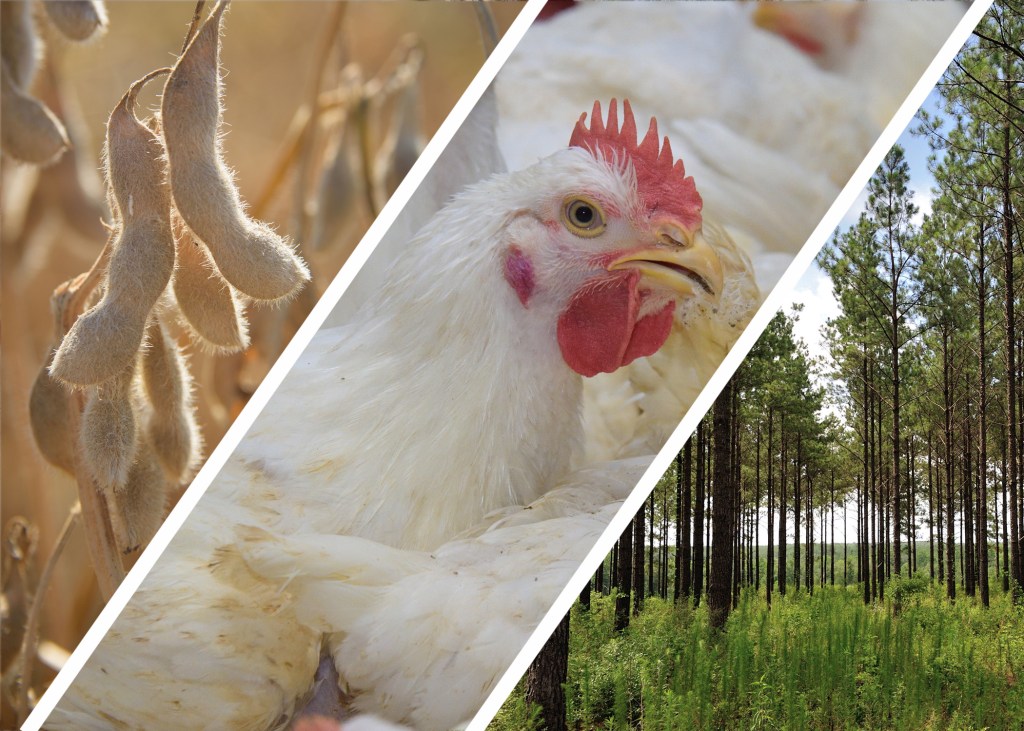 Poultry, soybeans and forestry were Mississippi’s top agricultural commodities, part of an industry that brought an estimated $9.7 billion of value to the state. (Photo Illustration by MSU Extension Service/Kevin Hudson)

Poultry, consistently the state’s No. 1 commodity, saw the biggest increase in estimated value. MSU Extension experts calculate that poultry had a value of $3.8 billion in Mississippi in 2022.

“Poultry’s 48% increase in value of production contributed $1.2 of the overall $1.8 billion increase,” Josh Maples said. “Chicken and egg prices have been much stronger in 2022 than in recent years, and that is the major driver in the sharp value increase.”

Trent Irby, Extension soybean specialist, said the increase in value is attributed to a slight increase in acreage, along with higher market prices. Mississippi growers harvested about 2.28 million acres of soybeans this year, up about 100,000 acres from 2021.

“Input costs kept pace with market prices, so profit potential wasn’t any greater this year, even with the good market prices,” Irby said.

Environmental challenges to the crop ranged from a very hot and dry summer to excessive rain in late August when crops were ready to harvest.

“This resulted in either lost yield potential from the heat and drought or lost quality of seed from those acres ready for harvest when we had the big rain events in late August,” Irby said.

“Through October 2022, the number of trees harvested increased 5.3%, and delivered wood prices for all product classes increased 16% over the same period in 2021, which is why the 2022 value of production is estimated to increase,” said John Auel, certification programs coordinator with the Mississippi Forestry Association and retired Extension assistant professor of forestry.

Corn and cotton come next in estimated value to the state. Corn declined almost 11% to $631 million, while cotton lint and seed rose 37% to $624 million.

Will Maples, Extension agricultural economist, said corn value was down due to a decrease in acreage. Corn is the only crop in the top 10 that experienced a decrease in value.

“Corn prices are high, but higher input costs persuaded producers to plant less corn in 2022 compared to the previous year,” Will Maples said. “We planted 27% fewer acres, and at 167 bushels an acre, yield was 14 bushels lower than last year.”

Decreased yield was linked to untimely spring rains that delayed planting, causing most of the crop to develop during the hottest part of summer.

Brian Pieralisi, Extension cotton specialist, said cotton was still being ginned by mid-December, and yields — estimated by the U.S. Department of Agriculture to be 1,033 pounds per acre — were slightly higher than those produced in 2021.

“Cotton acres were up about 75,000 from last year to 525,000,” Pieralisi said. “Increased acres and increased prices for both seed and lint likely contributed to the overall value. The cost of production also increased, making margins tight, so profitability depended on how your crop was sold.”

Livestock reached No. 6 on the overall agricultural value list, with an estimated 2022 value of $456 million, up 17% from the previous year. Mississippi retains its rank as the nation’s No. 1 catfish producer; this commodity rose 6% to an estimated value of $258 million in 2022.

Hay production supports the state’s livestock industry, and despite the summer drought, this crop came in at No. 8 overall with an estimated 2022 value of $164 million, up almost 15% from the previous year.

Sweet potatoes ranked next in estimated value, up just 2% to $112 million.

“Profit rose very little, if any, in most cases, as input costs rose substantially across all ag sectors,” said Lorin Harvey, Extension sweet potato specialist. “The price of sweet potatoes didn’t change, so the increased inputs cut down on profit margins.”

Mississippi growers harvested about 27,900 acres of sweet potatoes in 2022. The biggest challenge was high temperatures during the second half of transplanting and very low moisture over the entire growing season.

“This caused substantial yield declines for those fields that were transplanted in mid-June to July,” Harvey said.

An increasing amount of Mississippi sweet potato acreage is irrigated. Growers added about 1,000 irrigated acres this year, so about 15% of the crop was grown on irrigated land.

Specialty crops rounded out the top 10 in Mississippi agriculture, bringing an estimated $111 million in overall value to the state, up 2% from the previous year. Specialty crops include fruits, vegetables, nuts and nursery crops.

Hunter Bowman, Extension rice specialist, said rice prices increased in 2022, but they did not increase enough to offset the higher input costs.

“In 2022, we harvested approximately 85,000 acres of rice,” Bowman said. “With the way things look for next year, I expect we will see an increase to 100,000 acres. This will depend on what the market and inputs do between now and then.”

Brendan Zurweller, Extension peanut specialist, said growers planted fewer acres of peanuts because contracts offered before planting were less competitive than for other row crops. Hot, dry weather in June and July also reduced yields in some parts of the state, but overall yields were near the typical average.

“Prices have steadily increased since planting this year,” Zurweller said. “If prices remain high into next year, there will likely be an increase in peanut acreage.”

Peanuts are an important crop to include in a crop rotation, as they provide many nutrient and pest suppression benefits to the crops they are rotated with.

Government payments come through a variety of crop insurance and relief efforts, and these declined dramatically from previous years. Mississippi growers received an estimated $299 million in government payments, down 36% from 2021 and less than half of what was received in 2020.