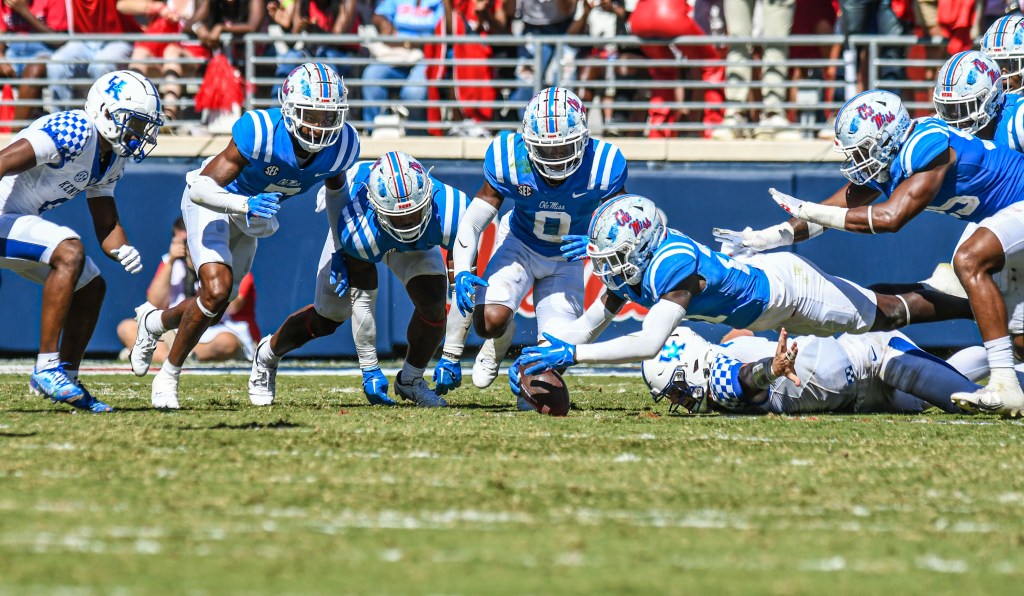 The Rebels accepted national letters of intent from eight prospects with a 4-star rating to highlight the class, which head coach Lane Kiffin cautioned is just the beginning of a new batch of talent set to join the program.

“Excited about the guys who we’ve already received their papers,” Kiffin said. “I think there’s a lot of really good players in there. Our coaches did a good job, the entire program working really hard to put this together and capitalize on the momentum on the field over the last couple of years and keeping a couple really high-impact recruits in the state of Mississippi. Kind of unusual press conference because no portal guys to talk about, which is a lot of the class nowadays.”

Just three of Ole Miss’ 12 signees come from inside the Magnolia State’s borders, but Kiffin’s staff made the home-state signatures count with a trio of 4-star prospects, arguably the three best the state had to offer. Linebacker Suntarine Perkins of Raleigh and receiver Ayden Williams of Ridgeland come as Ole Miss’ two highest-rated recruits with On3 Consensus national rankings of No. 58 and No. 86, respectively. They’re also the consensus top two prospects in Mississippi.

“Really big,” Kiffin said of inking Mississippi’s best. “Something that didn’t necessarily happen when we first got here. They were going away to play. I think we did a better job of that. Hope we continue to do that. As guys come in and have success here, that will help that.”

Perkins and Williams are joined by defensive lineman Jamarious Brown of Moss Point, who ranks fifth in the On3 Consensus rankings but is rated as high as second among Mississippi recruits across all recruiting services.

Running back Kedrick Reescano out of New Caney, Texas, joins Perkins and Williams as the third consensus top 150 prospect in the class. Reescano, who is the No. 5 running back and No. 103 overall prospect in the On3 rankings, will join the top rushing offense in Power 5.

“I think it says a lot for a guy to follow arguably the best freshman in America in his spot and be willing to come compete,” Kiffin said. “He’s been an extremely productive back that we had way up there on the board from early on. I think he has a chance to be really special.”

Ole Miss also brought in two key pieces to pave the way for Reescano and Co., including the signature of 4-star offensive lineman Brycen Sanders out of Chattanooga, Tennessee. Sanders is the No. 18 interior lineman and a top 300 prospect nationally in the consensus rankings. Ethan Fields will join Sanders on the offensive front after flipping late from his verbal commitment to Purdue.

The Rebels added two more offensive playmakers in receiver Cayden Lee and tight end Jayvontay Conner. Lee joined as the last signee of the incoming freshman class and the eighth 4-star, joining the Rebel pass-catching corps as the No. 26 prospect out of Georgia and the nation’s No. 36 receiver according to Rivals. Conner, a 3-star out of Winston-Salem, North Carolina, is ESPN’s No. 17 tight end prospect in the nation.

Defensively, Ole Miss once again stocked up on talented defensive backs, signing 4-star cornerback Braxton Myers out of Coppell, Texas, 4-star safety AJ Brown out of Cordele, Georgia, and 3-star safety Daniel Demery out of Flower Mound, Texas. Myers brings the highest ranking of the bunch, tabbed as a top 150 (No. 146) player nationally by 247Sports and the nation’s No. 9 corner.

Skielar Mann will join Perkins in the linebacker room. The Fort Valley, Georgia, is the No. 22 linebacker in the country according to ESPN.

With early signing day in the books, the work is far from complete for the Rebel coaching staff, who will continue to fill out the roster by whatever means necessary.

“It’s so incomplete compared to what this will look like when we start spring ball, let alone camp,” Kiffin said. “I think you’ll see a lot of portal players here and maybe not even necessarily what you’re used to where it’s all, these are portal guys who are supposed to be starters. I think you’ll see portal guys in backup roles. You’ll fill out your roster, there’s thousands of guys in there, they’re not all going to find what they think they’re going to find.”