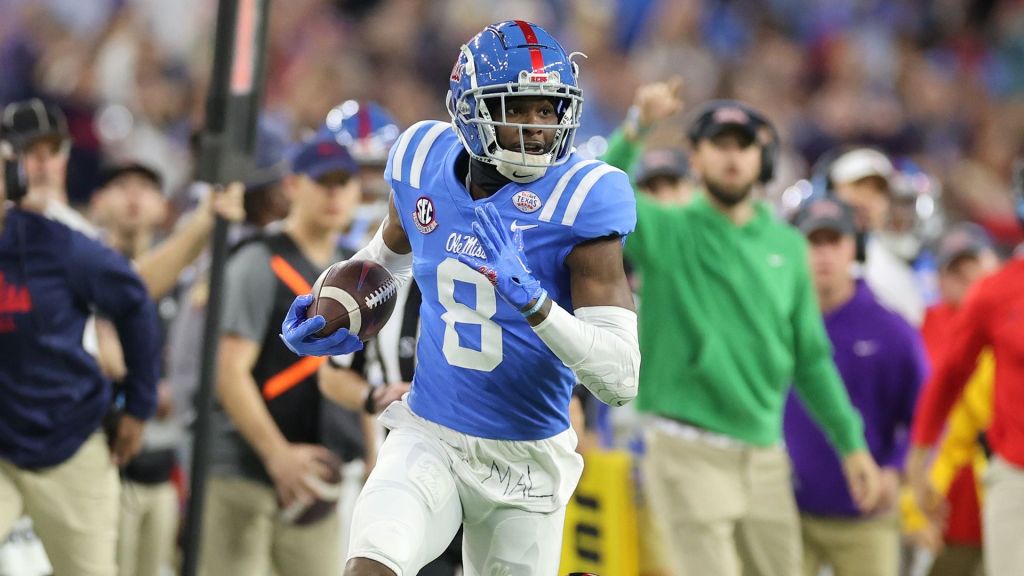 Ole Miss wide receiver Malik Heath runs down the sideline in the Rebels' 42-25 loss to Texas Tech in the TaxAct Texas Bowl in Houston on Wednesday, Dec. 28, 2022. (Ole Miss Athletics)

Ole Miss outgained Texas Tech 558-484 on the night at NRG Stadium, but the Rebels coughed up five turnovers and went 2-for-7 on fourth-down attempts in the defeat, finishing the 2022 campaign at 8-5.

Jaxson Dart racked up 427 total yards and accounted for three touchdowns to fuel the Rebel offense. Malik Heath was his top target on the night hauling in eight receptions for 137 yards and a highlight-reel one-handed touchdown. Despite Texas Tech’s determination to stop the vaunted Rebel rushing attack, Quinshon Judkins and Zach Evans combined for 128 rushing yards and one touchdown.

Defensively, Tavius Robinson had a massive night for the Rebels, forcing two fumbles in addition to a sack and a QB hurry. Ashanti Cistrunk led the team in tackles with 12, while Trey Washington had his best game in a Rebel uniform, notching nine tackles and his first career interception.

The Ole Miss offense looked sharp early before stalling out in Texas Tech territory following a failed fourth down conversion. The Red Raiders got to work on offense, but a clutch interception by Washington in the endzone stopped them – the first pick of his career.

But after the Rebel offense couldn’t capitalize, the Ole Miss defense yielded a two-yard score to quarterback Tyler Shough to put Texas Tech up 7-0 with 6:43 left in the quarter.

Ole Miss struck back in quick fashion on a five-play, 75-yard drive that lasted just 77 seconds and ended with an eight-yard rushing score by Zach Evans to knot the game 7-7. Tech drove back into Ole Miss territory, but the Rebel defense held, forcing a 42-yard field goal to put the Red Raiders up 10-7 at 3:23.

Texas Tech went on a 16-0 run in the second quarter, beginning with score off of a Dart interception. Tech made the most of the short field again with another two-yard touchdown on the ground by Shough to put the Red Raiders up 17-7 with 6:59 to go in the half. Texas Tech tacked on another 32-yard field goal on its next drive to go up 20-7.

On the ensuing Ole Miss drive, a big hit on Dart jarred the ball loose and was recovered by Tech, once again deep in Rebel territory. That led to a 12-yard touchdown pass on an RPO from Shough to Jerand Bradley, putting the Red Raiders up 26-7 with 28 seconds left in the half following a failed two-point attempt.

Ole Miss struck first in the second half on an 11-yard pass from Dart to wide receiver Jordan Watkins at the 9:08 mark following a long 10-play, 80-yard drive. But, a missed PAT following a false start made it 26-13 in favor of the Red Raiders. The Rebel defense persevered, though, as defensive end Tavius Robinson forced his second fumble of the game and fellow lineman Jared Ivey came up with the recovery.

However, the Rebel offense once again couldn’t capitalize on the Tech miscue, and the Red Raiders extended their lead in the fourth following another long 11-play, 71-yard drive that ended with a one-yard punch-in by SaRodorick Thompson, but the failed two-point try made it 32-13 with 13:20 to play. The Red Raiders would tack on another 26-yard field goal at the 9:36 mark to make it 35-13 following a Dayton Wade fumble deep in Tech territory and two successive personal foul penalties on the Rebels.

Dart put the Rebels back on the board following a gutsy 9-yard touchdown scamper that left him banged up in the endzone following a seven-play, 75-yard scoring drive to make it 35-19 with 7:35 to play – his first rushing touchdown as a Rebel.

Tech nearly scored again, if not for a well-timed punch by cornerback Miles Battle on running back Cam’Ron Valdez inches before the goal line, forcing a fumble that went out of the back of the endzone for a touchback.

Senior wideout Malik Heath highlighted a big night with an acrobatic 19-yard touchdown catch from Dart with 3:10 to play, but the Rebel two-point conversion attempt failed, making it a 10-point game.

After the failed two-point try, the small comeback window slammed shut as a 44-yard onside kick recovery return for a touchdown by Texas Tech’s Loic Fouonji quickly poured cold water on Ole Miss’ momentum to push the Red Raiders back up to a 42-25 lead.