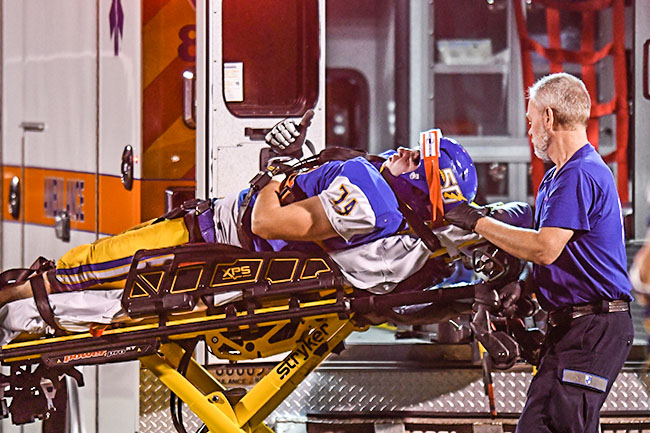 Oxford High offensive lineman Cade Gray gives a thumbs-up as he is taken to an ambulance after being injured against DeSoto Central at Bobby Holcomb Field in Oxford, Miss. on Thursday, October 10, 2019. (Bruce Newman, Oxford Eagle via AP)

Every time an athlete steps between the lines they run the risk of injury. Most of the time that means a nasty cut, a pulled muscle or a sprained ankle, but the possibility of a serious, potentially life-threatening injury also exists.

Hamlin went into cardiac arrest on the turf and had to be resuscitated by team trainers before being rushed to the hospital, where he was sedated and resuscitated once more.

The incident shocked not just the NFL but the entire sports world, with outpourings of support coming from all corners of the globe on social media.

Hamlin remains in critical condition at the University of Cincinnati Medical Center, but has shown “remarkable improvement” in recent days and demonstrated to physicians that he remains “neurologically intact.”

In light of the tragic event, administrators and staff at Oxford High School shared details about safety protocols and procedures in the place of a life-threatening injury.

Head athletic trainer Chance Ragsdale is the first responder to any injury, administering first aid along with his University of Mississippi athletic training students and calling for emergency medical services.

The school also has defibrillators at each of the various athletic facilities, as well as a portable AED that Ragsdale and his team keep in their possession.

In the event that a player must be transported to the hospital, Ragsdale and his team will continue to administer first aid while school resource officers redirect traffic to allow easy access for ambulances.

Overseeing the entire process are co-activities directors Chris Baughman and Tabitha Beard, who ensure that EMS personnel have ease of access to the field and provide assistance in any way they can.

Baughman said administrators, football coaches and school resource officers meet with the Oxford Police Department twice before the start of the football season to go over procedures for incidents of severe injury as well as weather and active shooters.

“We met twice preseason — once in the summer and then once right before the season began,” Baughman said. “We definitely have an emergency action plan for not only this type of situation, but also weather… we have active shooter emergency action plans that we talk through and make sure everyone knows their part… so yes we have — and MHSAA actually requires it — a whole emergency action in place for events like that.”

Ragsdale said the school’s preparedness gives him confidence in their ability to handle any type of emergency medical situation.

“If, god forbid, something like that were to ever happen we go through these scenarios at the beginning of the season,” he said. “Thankfully at Oxford High we’ve put together a tremendous emergency action plan.”