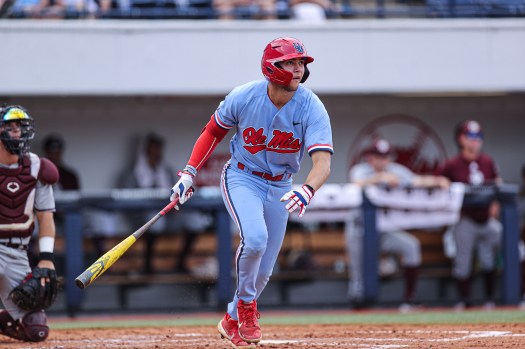 Ole Miss shortstop Jacob Gonzalez hits a solo home run in the bottom of the third inning in the Rebels' 12-5 loss to Texas A&M in Oxford on Saturday, May 21, 2022. Gonzalez was selected as a preseason First Team All-American by Perfect Game this week. (Josh McCoy/Ole Miss Athletics) 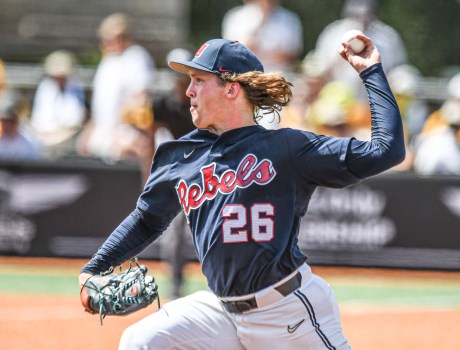 Ole Miss starter Hunter Elliott delivers a pitch in the Rebels' 4-0 win over No. 11 Southern Miss in the Hattiesburg Super Regional on Sunday, June 12, 2022. Elliott was selected as a preseason Second Team All American by Perfect Game this week. (©Bruce Newman)

Both Gonzalez and Elliott were named to Collegiate Baseball’s Preseason All-America Team in December. Gonzalez has also been named the No. 3 MLB prospect in all of college baseball by D1Baseball and the No. 5 2023 MLB Draft prospect by MLB Pipeline heading into the 2023 season.

Gonzalez started every game of the 2022 season at shortstop for the Rebels while leading Ole Miss in runs scored (73) and walks (50). He also finished second on the team in RBI (52), total bases (135), and home runs (18). The junior hit .273 with an OPS of .963 and a slugging percentage of .558 while leading the Rebels to their first National Championship in program history. Gonzalez put together a phenomenal postseason, scoring at least one run in every game of both the Coral Gables Regional and the Hattiesburg Super Regional. He also went 3-for-4 with a solo home run that sparked the scoring for the Rebels in the National Title clinching game against Oklahoma in the College World Series Final.

Elliott was one of the best freshmen in the country in 2022, earning Freshman All-America honors from Collegiate Baseball News, Perfect Game, and D1Baseball. He was also named to the All-SEC Freshman Team and the USA Baseball Collegiate National Team at the end of the season. Elliott finished third in the SEC in ERA with a 2.70 and was sixth in the conference in total strikeouts with 102 in his first season.

The Tupelo native put together one of the best postseasons by a freshman in recent memory, going 2-0 and allowing just four earned runs over 25.1 innings of work. He also struck out 28 batters in his first collegiate postseason.

The Rebels will begin their national title defense on February 17 as they host Delaware for the first of a three-game series at Swayze Field.