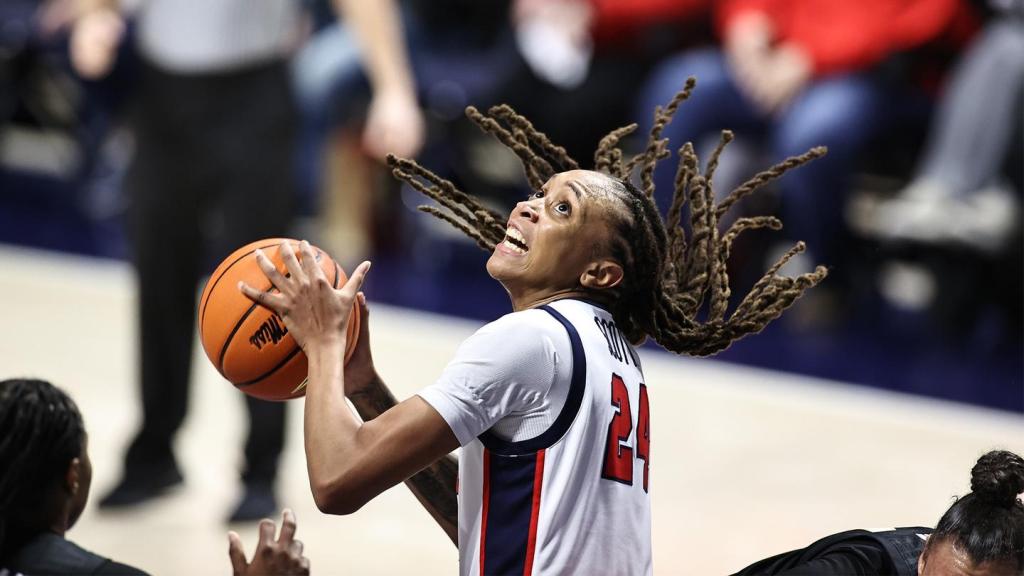 Ole Miss forward Madison Scott plays against Vanderbilt in the Rebels' 74-53 victory over the Commodores in Oxford on Thursday, Jan. 6, 2023. (Ole Miss Athletics)

Once again, Ole Miss turned on the jets in the third quarter to move the needle past Vanderbilt 74-53 from the SJB Pavilion Thursday night. The duo of Angel Baker and Madison Scott combined for 39 points, lifting the Rebels to their second straight series win over the Commodores for the first time since 1986 & 1987.

The pair was unstoppable, as Ole Miss (14-2, 3-0 SEC) poured on 21 points in the third quarter to solidify its win against Vanderbilt (9-8, 0-3 SEC). For the sixth straight game, Scott reached double digits with 17 points, setting a new career-long streak. Scott also carried the Rebels defensively, with a game-high nine rebounds.

There was no doubt that Baker was feeling it from deep, finishing her night with a season-high four triples en route to a 22-point game for back-to-back 20-point outings.

The Rebels started cooking following Scott cashing in a clean block for a layup, and by a signature Angel Baker triple. Baker and Scott continued to pile up points, combining to score Ole Miss’ 17 points in the first quarter to lead by one at 17-16.

Vanderbilt utilized the three ball to remain close with the Rebels, with Ole Miss only holding its largest lead of five through the first 15 minutes. A 7-0 Rebel run in the second, propelled them to surge ahead, while locking down the Commodores on defense. Ole Miss held Vanderbilt scoreless the final six minutes of the half to take a 35-26 lead.

Ole Miss did not cool off, going on a quick 10-0 run within the opening minutes of the third to extend its lead to 20 by 46-26. Vanderbilt cut into the Rebel lead, not allowing a bucket the remaining three minutes of the quarter, yet Ole Miss retained control up 57-40 with 10 minutes to play.

Despite a strong defensive stand from the Commodores, Ole Miss continued to overpower Vanderbilt in the fourth quarter outscoring VU, 17-13 to run away 74-53 for a 21-point victory.

Ole Miss will once again pack its defense and hit the road for a visit to Aggieland to take on Texas A&M in a nationally televised game Sunday. The Rebels look to follow up last season’s successful trip, with Ole Miss earning its first ever victory in Bryan-College Station in 2022.