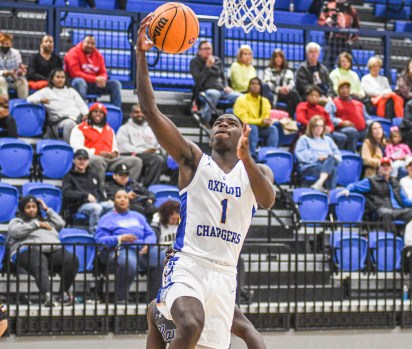 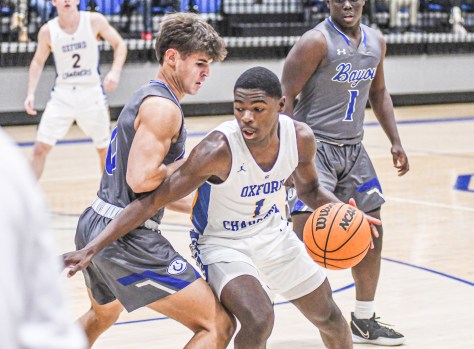 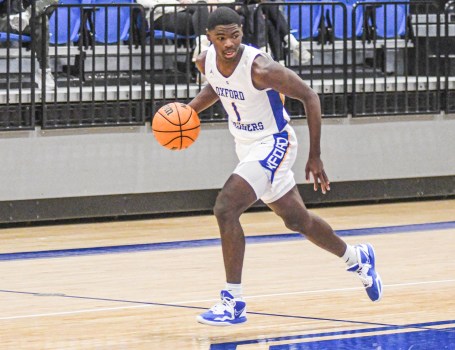 Oxford's D.J. Davis brings the ball upcourt against Bayou Academy in the Chargers' 60-23 victory over the Colts in Oxford on Monday, Nov. 21, 2022. (©Bruce Newman)

A slithery finisher and versatile shooter, the 6-foot-2 combo guard is more than capable of filling up the scoreboard with quick drives to the rim and lethal step-backs that leave opponents grasping at air.

But he’s trying to be more than that.

The Oxford junior burst onto the scene last season, earning First Team All-Region honors as a sophomore while leading the Chargers with 14.7 points per contest.

He showcased a rare ability to get to the rim against any defensive set, using his superior athleticism and fluidity to contort his body around defenders and finish through traffic with ease.

His strong sophomore campaign drew the attention of several college coaches, who told Davis he needed to work on his defense and perimeter shooting in order to make it to the next level.

The star guard did just that, spending hundreds of hours in the gym working on his consistency from outside and expanding his range.

“This summer I worked a lot on my shooting because college coaches would say ‘I need you to keep working on your three-point shot… I need you to be able to shoot the ball,’ so I just honed in on my shot and shooting the ball,” Davis said.

His hard work in the summer raised his game to a new level this season, where he is averaging over 20 points per game after taking over as the Chargers’ lead ballhandler.

Davis credited his long hours with the shooting machine for much of his development, but said another major contributor is the confidence instilled in him by head coach Drew Tyler.

“I got the green light all the time… coach knows when I’m hot and I’m ready to take a game over so he gives me that green light,” he said.

Tyler has called Davis “the best junior combo guard in the state of Mississippi,” praising his leadership and poise while highlighting his ability to score at multiple levels.

“He can score at the rim, he can score behind the three-point line, he gets to the free-throw line. He’s really comfortable with the ball in his hands and that’s a good thing,” he said of Davis earlier in the season. “He’s doing everything that a leader does… and he’ll play high-level Division I basketball.”

Much of that development is the product of having another year of experience under his belt, but part of it was also driven by a demand to adapt to the roster around him.

Last season Oxford had a number of ballhandlers to turn to, with seniors Jacquez Elliott and Omari Frierson carrying a significant portion of the scoring and playmaking duties.

This year the Chargers are reliant on Davis to carry the brunt of that responsibility, letting him go to work with the ball in his hands and spreading the floor with shooters such as Miles Luber, Kobe Jones, Jackson Myatt and Julian Buford.

The improved spacing gives Davis more room to search for weak points in the defense to exploit, making it easier for him to get to his spots or create open looks for teammates.

Despite his new role as Oxford’s lead ballhandler, he said he still views himself as a combo guard capable of scoring or passing at any moment.

“I consider myself a combo guard because I like to score but I like seeing my teammates do well too,” Davis said. “Right now in high school I need to score for us to win but I also like distributing the ball. I like trying to get my teammates involved.”

The Chargers’ addition of star freshman Adam Tyson has helped counteract the increased burden and prevented defenses from keying in on Davis entirely.

The 6-foot-7 Tyson, who is a capable shooter, ballhandler and finisher, has taken some of the spotlight off of him and made it hard for opponents to bring double-teams.

The two former Lafayette standouts also have a long history together which gives them a unique synergy on the court.

“[When we] were at Lafayette we were neighbors and we’ve been friends… I kind of helped convince him to come over to Oxford,” Davis said when asked about his relationship with Tyson. “He can shoot it, he can dribble, he can handle it, he just knows the game. It’s been fun having someone else with my mindset on the court with me knowing that he has confidence in me and I have confidence in him.”

That connectedness, paired with their incredible talent, makes it difficult for even the most committed defensive teams to get stops when Oxford is rolling.

Davis and the Chargers know that offense is only one half of the equation however.

That’s why the star guard has placed a renewed focus on the defensive end of the floor this season as he attempts to make himself a more attractive college prospect.

While he was never a liability on defense, Davis worked long hours with assistant coach Tyler Reed to turn himself into a legitimate two-way player.

The pair worked on Davis’s footwork and positioning in an effort to make him a more effective positional defender, but he has become a far more disruptive presence on that end as well.

“Recently I have been focused on the defensive side because I’m talking to a college coach and that’s what he says he needs so I’ve been working with Coach Reed a lot — whether it’s taking charges, staying down, pushing off with my left foot, right foot, so a lot of work on defense.”

Davis’s long hours in the gym paid off on Friday, when he exploded for a career-high 45 points, seven rebounds and two steals in a victory over Grenada.

The scoring outburst turned heads, drawing attention from all corners of the state and earning him Player of the Week honors from Capital Sports Mississippi.

It also served as a reminder to opponents that while he may be a more well-rounded player and willing distributor, Davis still always has the green light.