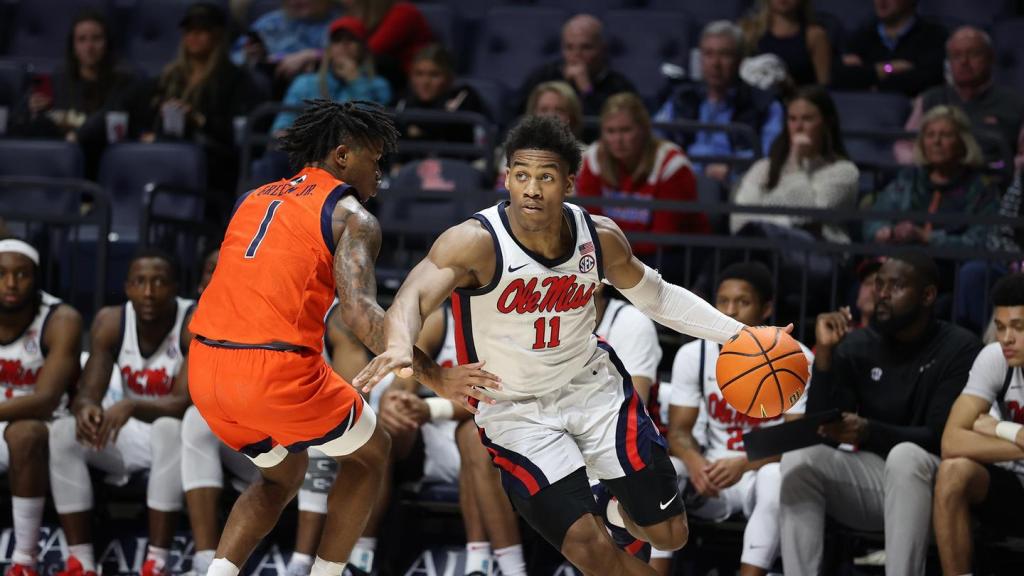 After taking a one-point lead into halftime, the Ole Miss men’s basketball team fell to another tough opponent in conference in an 82-73 game with No. 21 Auburn on Tuesday night in the SJB Pavilion.

Matthew Murrell found Jaemyn Brakefield for three to start things off for the Rebels (8-8, 0-4 SEC), as the home team would eventually own a seven-point advantage, 19-12, with 12:45 left in the first half. Both Murrell and Brakefield helped Ole Miss lead at the midway break 35-34 with 10 points each. After the Tigers (13-3, 3-1 SEC) claimed the lead early in the second half, Tye Fagan lobbed a ball up to Brakefield who connected on the alley-oop to get the Rebels within two, 41-39 with 16:28 left. However, Auburn would extend their lead to double digits and hold off the Ole Miss comeback attempt for the remainder of the game.

Murrell led all scorers in the game with 24 points, his fifth game of the season with 20 or more and one off his season high of 25 vs. Chattanooga on Nov. 15. Going 8-8 from the free throw line, he now owns an 89.1 percent clip from the charity stripe, which currently sits as the fourth-highest in a single season in program history. The junior guard also led the team in rebounds with six.

Brakefield added 12 and has scored in double figures in each of the team’s conference games so far, while Fagan had a season-best 13 points including a trio of makes from three. Theo Akwuba set a season-high with five blocks defensively, the second Rebel to collect that many in a game since Malique Ewin had five swats against UCF on Dec. 14.

The Rebels remain at home next and will host Georgia on Saturday, January 14 at noon, with the first 500 fans receiving throwback replica jerseys. The game will be televised on the SEC Network.