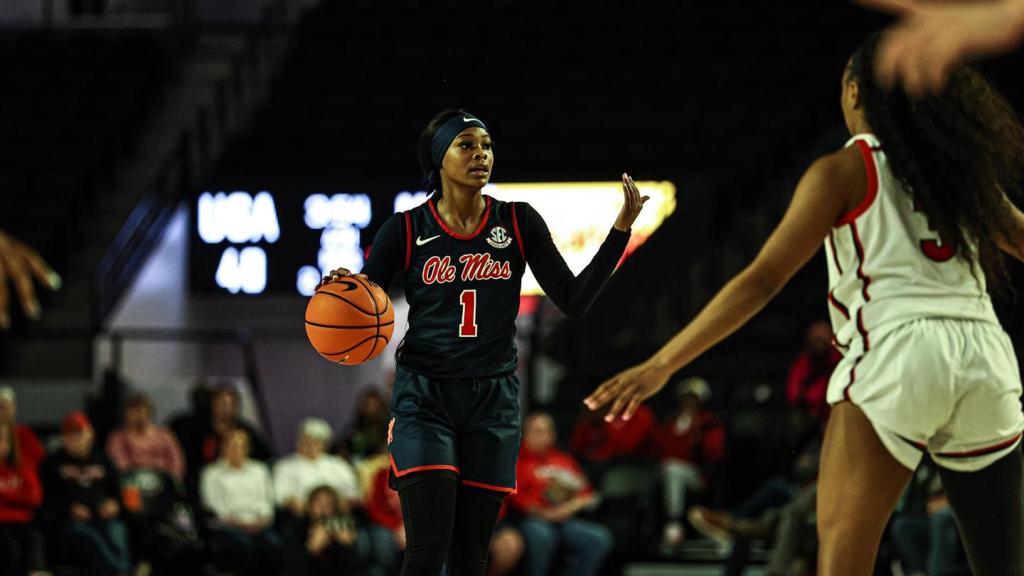 Ole Miss guard Myah Taylor (1) plays against Georgia in the Rebels' 66-58 victory over the Bulldogs in Athens, Georgia on Thursday. (Ole Miss Athletics)

ATHENS, Ga. — For only the second time in the history of Ole Miss women’s basketball and the first since 2010, the Rebels walked out of Stegeman Coliseum victorious Thursday night, after toppling Georgia, 66-58.

Playing some of the best basketball of her Ole Miss career, Madison Scott rattled off double digits for the eighth game in a row as she finished with 18 points. However, Angel Baker led the Rebels, with 20 points for her fifth 20-point outing of the year.

The Rebels were dropping dimes like no problem, with Myah Taylor tying a season-best with eight and adding a season-high 11 points. Scott matched a career-high with five of her own.

Defensively, Ole Miss shut Georgia down from the perimeter as the Bulldogs went a mere 1-of-11 from deep. Ole Miss has now held 16-of-18 opponents to five triples or less. Off the glass, Tyia Singleton and Scott carried their weight with seven rebounds apiece adding to the Rebel total of 35.

Georgia came out in a press, but the Rebels responded utilizing their size under the basket to set a defensive presence. Taylor came to play with seven points alone within the first five minutes of action. The Rebels kicked it into gear with a 7-2 run to cap off the first, leading 22-14.

The Ole Miss defense continued to clamp down on the Bulldogs, holding them without a field goal for most of the second quarter. Meanwhile, Baker found her footing as she assisted the Rebels to pad their lead, hitting 4-of-5 shots for nine points in the half. Capitalizing off of UGA miscues, forcing five Bulldog turnovers within the final five minutes of the second to go up 32-22 at the break.

A fight emerged from the Bulldogs in the third, as they outscored the Rebels 19-16. Despite the Georgia run, Ole Miss didn’t allow its lead to fade away up 48-41 with 10 minutes to play.

Finding itself under pressure, Ole Miss remained calm and collected to keep the Bulldogs at bay. Scott proved why she’s regarded as one of the best in the SEC, coming up clutch with seven points in the waning minutes. Her first three of the night proved to be a big one, with Baker providing the Rebels with breathing room up by 10. From then on, Ole Miss was able to close the win out, defeating Georgia, 66-58.