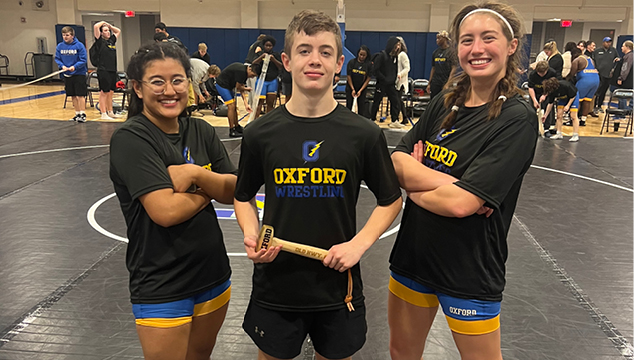 Wrestling has finally made its way to Oxford.

After years of buildup Oxford High School hosted the first home wrestling match in school history Thursday, defeating Tupelo on both the girls’ and boys’ side to claim the “Highway 6 Hammer.”

The atmosphere in the gym was electric throughout the match, with the crowd cheering every point and whipping into a frenzy each time an Oxford player pinned their opponent.

“It was absolutely fantastic,” head coach Konrad Ernst said when asked about the enthusiastic support. “These kids have been working really hard and I’m just really proud of them. It was amazing to have the community support that we did, the gym was absolutely packed and it was really loud. I think this sets the tone for the rest of the season.”

The Chargers dominated the match, winning 64-18 on the boys’ side and winning on a tiebreaker on the girls’ side after securing more pin-downs.

Oxford will head back out on the road before returning home to host a tournament on Jan. 28.