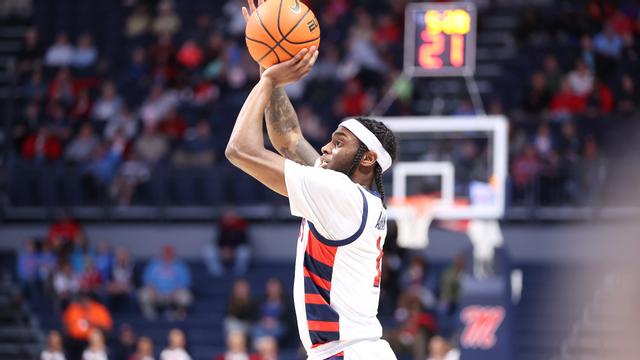 Ole Miss guard Amaree Abram shoots against Georgia in the Rebels' 62-58 loss to the Bulldogs on Saturday. (Ole Miss Athletics)

Following a 10-2 run by Georgia in the closing moments, the Ole Miss men’s basketball team dropped a 62-58 game with the Bulldogs on Saturday in the SJB Pavilion.

Neither team led by more than three points through the entire first half as there were 12 lead changes and four ties in the first 20 minutes of action. At the first media timeout, Ole Miss (8-9, 0-5 SEC) led 8-5 after a steal by Amaree Abram and fast-break layup from Myles Burns. The two teams drew even late in the first period at 23, 25, and 27 points apiece, before Georgia (13-4, 3-1 SEC) took a one-point lead into the locker rooms for halftime 30-29.

An early three for Matthew Murrell put the Rebels on top 36-32 with 17:06 left on the clock, before an offensive rebound and put back by Jaemyn Brakefield pushed the Ole Miss lead to eight. The Bulldogs would tie the game with just under nine minutes left to play at 46-46, but a layup down low from Jayveous McKinnis minutes later gave Ole Miss a final lead 56-52. Two late threes from Georgia put the game away before the Rebels were forced to foul.

For the 11th time this season the Rebels were led offensively by Murrell, who finished with 13 points and made a pair of threes for his eighth game this year with multiple makes from deep. Abram added 12 points after getting his 12th start of the season today. The two guards finished with nine combined assists, as Abram tied his season-high with five and Murrell dished out four. Entering the game ranked fifth in the SEC in steals per game, Burns collected two today, the 13th time in 17 games for the Rebels that Burns has had multiple steals in a game.

Ole Miss hits the road next, as they travel to Columbia, S.C. for a matchup with South Carolina on Tuesday, January 17 at 5:30 p.m. on the SEC Network.