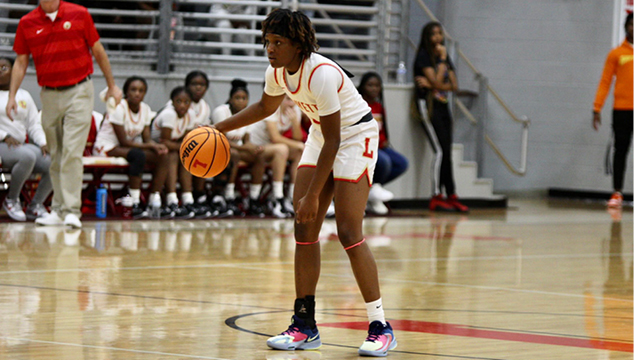 Lafayette's Mariah Reed-Jones (5) plays against Lewisburg in the Commodores' 54-44 victory over the Patriots in Oxford on Thursday, Nov. 10, 2022. (Claire Anne Pugh/CMG)

Mariah Reed-Jones is among elite company.

The Lafayette guard joined the school’s exclusive 1,000-point club over the weekend, eclipsing the mark in a 25-point performance against Cleveland Central that moved the Lady Commodores to 3-0 in region play.

“I told her when she came off the court how proud I was of her,” said head coach Shayne Linzy. “Any time you have a player score 1,000 points in a career it’s pretty cool. It’s not like it’s something that happens all the time so that puts you in really unique company.”

Reed-Jones is just the fourth player to reach 1,000 points in their career since Linzy took over as the head coach of the Lady Commodores in 2015.

The 5-foot-8 senior said reaching the historic milestone pushed her to keep working on her game, which she has taken to a new level this year as a do-everything point guard.

Linzy said his star guard is capable of even more heroics, praising her ability to not only score, but impact the game in a variety of ways.

“She can score 1,000 next month, she’s definitely capable of it,” Linzy said. “She’s been a big boost to us as a team the last three years. For teams to be successful, they’ve got to have somebody like that and we’ve been fortunate to have Mariah and have her do the things she’s doing for us.”

Lafayette is in prime position for an extended playoff run after jumping out to a 3-0 start in region play, winning their first three contests by an average margin of nearly 28 points.

The ‘Dores are proud of what they’ve accomplished so far, but Reed-Jones said they have just one goal for the rest of the season: