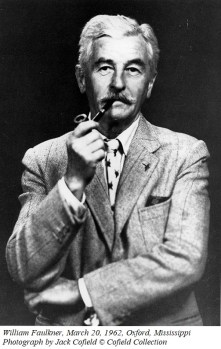 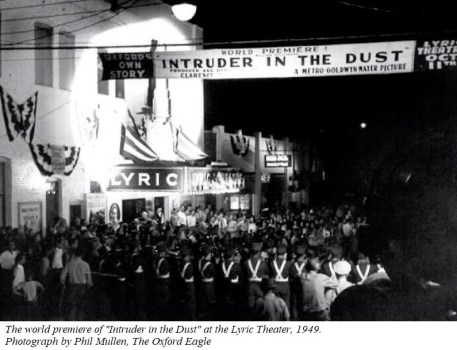 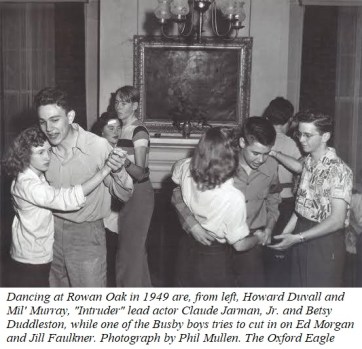 Dancing at Rowan Oak in 1949 are, from left, Howard Duvall and Mil Murray, "Intruder" lead actor Calude Jarman, Jr. and Betsy Duddleston, while one of the Busby boys tries to cut in on Ed Morgan and Jill Faulkner. Photograph by Phil Mullen. The Oxford Eagle

Intruder in the Dust was being filmed and there were movie stars on the Square. Oxford had just under
4,000 folks then and one of them had put the rest on the map. Any verbal jabs about the author not
holding down a conventional job, or about his solitary behavior around town, were squashed when MGM
paid William Faulkner the equivalent of $500,000 in today’s dollars for the movie rights to his novel.

The motion picture premiered at the Lyric Theater. Not long after came the Nobel Prize, and another
$300,000 in 2023 money.

“But it wasn’t until the Nobel Prize that they really thawed out. They couldn’t understand my books, but
they could understand thirty thousand dollars.”

I have studied the town’s history and have come across dividing lines after which things were never quite
the same. William Faulkner wrote and underlined 1949 and ’50.

We made the world’s literary map and to this day you can stroll the grounds at his home and hear a
variety of foreign languages from his pilgrims to Rowan Oak, to us.