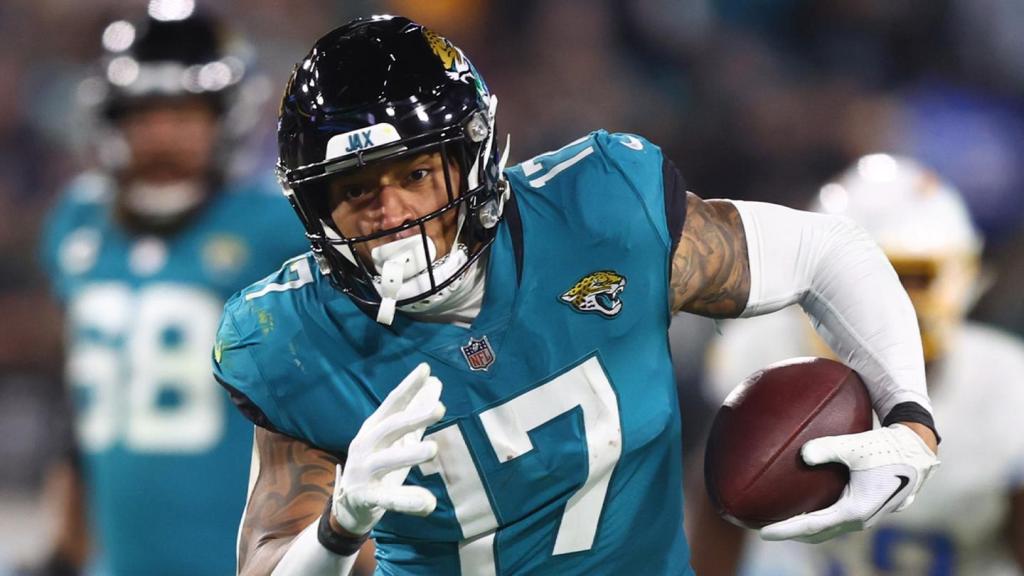 Former Ole Miss tight end Evan Engram (17) plays for the Jacksonville Jaguars in their 31-30 victory over the Los Angeles Chargers in the Wild Card round of the NFL playoffs on Saturday. (Ole Miss Athletics)

With 13 players earning playoff spots, the NFL Rebels made noise in the opening round, scoring four touchdowns. Metcalf led the way with two, while tight ends Evan Engram and Dawson Knox each found the end zone. Overall, eight former Rebels played on Wild Card Weekend. Here’s a rundown on how each performed:

#24 Snoop Conner | RB | Jacksonville Jaguars
Was listed as active but did not play in the Jaguars’ win over the Chargers.

#17 Evan Engram | TE | Jacksonville Jaguars
Tallied seven receptions for 93 yards, including a nine-yard touchdown, as the Jaguars erased a 24-point deficit and stormed back to top the Chargers 31-30.

Lawrence to Engram! @Jaguars on the board. #SuperWildCard

#21 Mike Hilton | CB | Cincinnati Bengals
Lined up as a reserve cornerback on 27 snaps, totaling two tackles for loss, including an eight-yard sack, and a pass breakup in the Bengals’ 24-17 win over the Ravens.

That’s our Mike Hilton with the sack, continuing to make his presence felt in this playoff game! #NFLRebs #HYDR pic.twitter.com/83ilavlvPJ

#88 Dawson Knox | TE | Buffalo Bills
Caught three passes for 20 yards, including a one-handed touchdown from six yards out in the Bills’ 34-31 win over the Dolphins. It marked Knox’s fifth consecutive game with a receiving touchdown.

#33 Deane Leonard | CB | Los Angeles Chargers
Appeared on 19 snaps on special teams in the 30-31 loss to the Jaguars.

#14 D.K. Metcalf | WR | Seattle Seahawks
Scored twice, racking up 136 receiving yards on 10 catches. Metcalf found the end zone from 50 yards out for the third time in his postseason career, tying Randy Moss for second most in NFL history.

GENO TO DK FOR 50 YARDS. @Seahawks take the lead!

#54 Sam Williams | DE | Dallas Cowboys
Appeared on 26 snaps as a reserve defensive end and 13 snaps on special teams in the Cowboys’ 31-14 win over Tampa Bay.