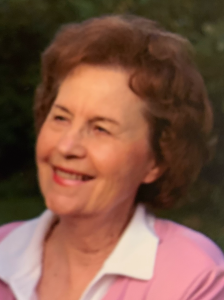 Mrs. Mary Claire Phillips Knight, 96, passed away Sunday, January 15, 2023, at Baptist Memorial Hospital in Memphis, TN. The funeral will be Friday, January 20, 2023 at 1:00 P.M. in the chapel of Waller Funeral Home with Bro. Jamie Moore officiating. Visitation will be held prior to the service beginning at 12:00 Noon. Burial will follow in Orwood Cemetery.

Mary Claire was born on April 29, 1926, to the late Hargis and Jimmie Hollowell Redding. She supported her husband, Gordon, while he obtained his Civil Engineering degree from The University of Mississippi. After his graduation, the couple moved from Oxford to locations in Illinois, Indiana, Mississippi and Tennessee. Throughout these moves, Mary Claire developed an independent and resilient nature that provided stability and love for her husband and children. In 1958, while living in Bloomington, IN, she was one of the founders of an organization that provided resources and support for individuals with disabilities, now known as Stone Belt. A talented artist, seamstress, and cook, she was known for her sweet tea and southern dishes. Mary Claire was a member of Bellevue Baptist Church in Memphis, TN and a faithful member of the Dorcas Sunday school class. She was known as the go-to prayer warrior, always willing to lift you up in times of need. Lovingly referred to as “Mimi”, Mary Claire was the proud grandmother to three grandchildren and two great-grandchildren. They all cherished their visits with Mimi and would gather around to hear her stories of growing up on the family farm in Taylor, MS. One of her many friends described Mary Claire as one of a kind, not only a beautiful and bright person, but a beautiful heart and soul.

In addition to her parents, Mrs. Knight was preceded in death by her husband of 40 years and father of her children, Gordon G. Phillips; her second husband, who was an unexpected blessing she married late in life, William “Bill” Knight; and two sons, Timothy Ray Phillips and Thomas Gordon Phillips.

Expressions of sympathy or memorial contributions in Mrs. Knight’s memory may be made to Stone Belt, 2815 E. 10th Street, Bloomington, IN 47408 or to the charity of the donor’s choice.