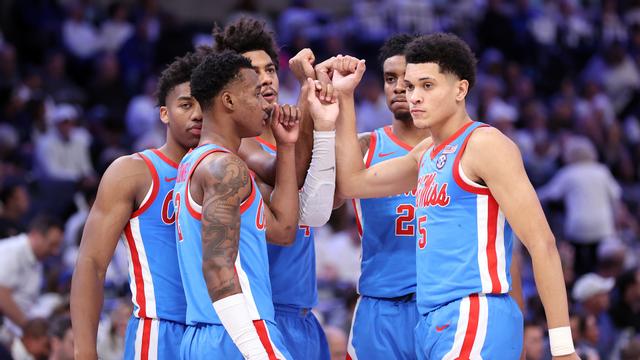 FAYETTEVILLE, Ark. — Following a tight opening half, the No. 25 Arkansas Razorbacks used an early second-half run to defeat the Ole Miss men’s basketball team 69-57 on Saturday in Bud Walton Arena.

The Rebels (9-10, 1-6 SEC) were first on the board following a score down low from Jayveous McKinnis. Ole Miss held a lead early in the first half, up by as much as five after a steal and dunk from Myles Burns and free throw by Matthew Murrell made it 15-10 with 13:37 left before halftime. An alley-oop from James White to McKinnis put the Rebels up one more time 25-24 with just over five minutes on the clock, before Arkansas (13-6, 2-5 SEC) took a three-point lead into the break 32-29.

The Razorbacks would push their advantage to double digits early in the second period and go out in front by as much as 21. A late 11-1 run from Ole Miss beginning at six minutes left on the clock helped the Rebels claw back; as threes from Daeshun Ruffin and Tye Fagan, followed by a Jaemyn Brakefield dunk forced an Arkansas timeout at 4:19. However, the clock would expire on the Rebels down by 12 at the final buzzer.

Ruffin and McKinnis led Ole Miss in scoring with 10 points each, the second-straight game with double digits from McKinnis and the sixth this season for Ruffin in 10 games played. The Razorbacks had four players in double figures, led by Anthony Black with 17.

Ole Miss returns home to the SJB Pavilion next, as they host Missouri on Tuesday, Jan. 24 at 6 p.m. on SEC Network.