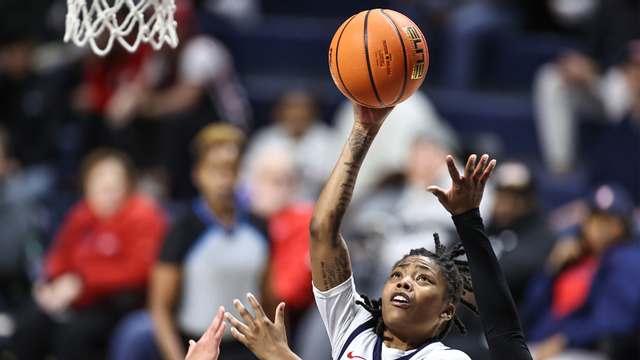 Ole Miss guard Angel Baker shoots a layup over Auburn in the Rebels' 77-76 loss to the Tigers on Sunday. (Ole Miss Athletics)

AUBURN, Ala. — Despite a fourth quarter comeback to force overtime, Ole Miss was unable to pull off the win at Auburn, ultimately falling 77-76 on Sunday night in its first SEC road loss. The Rebels now move to 22-25 all-time in overtime games.

Despite a season-high night from Angel Baker, it was not enough for Ole Miss (16-4, 5-2 SEC) to surge past Auburn and Aicha Coulibaly (11-8, 1-6 SEC). Coulibaly led all scorers with 31 points, while Baker carried the Rebels with a season-high 25 points and season-best 12 rebounds for her third double-double this year.

Madison Scott finished her night with 14 points, for her 10th game in a row with 10 plus points, while also tying a career-high with four blocks. In her first start in seven games, Marquesha Davis added 12 points with 10 in the first half.

The Rebels worked to set the tone within the first few minutes off 6-0 run, while establishing their defensive presence. A triple from Snudda Collins provided separation, as Ole Miss’ hands remained hot hitting five of its last eight shots to end the quarter leading 18-12.

Baker began to get going to get going, with 15 points in the first half as 13 of them came in the second quarter. While Auburn struggled to hit shots at its end of the floor for most of the second, Ole Miss was doing the opposite on the other side with another quick 7-0 run. Auburn fired back with a 10-0 run of its own to close the gap. The Rebels jumped back into gear to maintain its lead, up 41-33 halftime.

Auburn refused to let up, forcing a two-point game at 43-41 with in the in the opening moments of the third quarter. Both teams continued to trade blows back and forth, as Auburn’s Coulibaly remained on a tear as the Tigers gained a 57-53 lead with 10 minutes remaining.

Facing a seven-point deficit, the Rebels worked to chip away at the Tiger lead with nine minutes left. A 7-2 run highlighted by a bucket underneath from Scott, pushed the Rebels to within two at 5:26. After going down in the first quarter, Tyia Singleton came back and came up big with back-to-back layups as Ole Miss regained the lead at 64-62 with 3:29 remaining. Ole Miss rallied to force overtime at 70 all, its first overtime contest since 2021.

However, a banked-in three from Coulibaly pushed the Tigers over the top as Auburn handed Ole Miss its second SEC loss, 76-77.

The Rebels head back to Oxford for round two and the chance at a season-sweep against Mississippi State on Thursday (Jan. 26). The 8 p.m. CT matchup against the Bulldogs will air nationally on SEC Network.