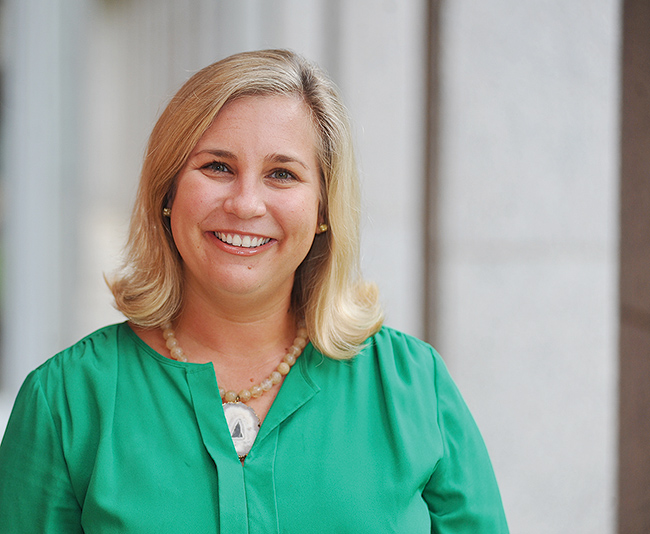 Katie Naron, in Oxford, Miss. on Thursday, August 20, 2015, will participate in "Dance Like The Stars" on Saturday in Tupelo to raise money for the Boys & Girls Club.

A third generation Ole Miss Rebel on both sides of her family, Katie Naron, 34, grew up in Columbia, Mississippi, and attended the University of Mississippi, earning undergraduate and graduate degrees in elementary education.

After teaching fourth grade for seven years, she began teaching elementary education courses in the UM School of Education.

“I have a strong desire to assist and improve education in Mississippi,” she said, “and I got involved with the Boys & Girls Club.”

Naron is currently being educated how to chacha so she can compete in the Dance Like the Stars event in Tupelo on Saturday at 6:30 p.m. at the BancorpSouth Arena.

She is participating to raise funds for and create awareness about the Boys and Girls Club of North Mississippi.

“I have a lot of friends coming to support me,” she said.

She recently held a fundraising event called A Southern Sunday Supper at Woodson Ridge Farms that was funded by local Oxford businesses.

Naron has been paired with professional dance partner Daniel Stevenson, a recent graduate of Mississippi StateUniversity. “He has coached me and pushed me, as I have learned a cha-cha dance routine,” said the former Columbia High School cheerleader. “It’s been 16 years since I put on any dance shoes.”

Naron and her dance partner have practiced about 20 times.

“It has been very much an adventure,” she said. “The first couple of weeks, I thought, ‘What in the world have I gotten myself into?’ As the weeks progressed, I became more comfortable in my own skin.”

Evie Boyd, director of marketing and special events for the Boys & Girls Club of North Mississippi, said the Dance Like the Stars event began in 2006, and more than 90 community volunteers have participated.

“Volunteers agree to learn a professional ballroom dance routine with a professional partner from Tupelo’sTheDanceStudio, but more importantly, they agree to raise funds for the B&GCNMS,” Boyd said. “The dancer raising the most money is named the event grand champion. There is also a judges choice award.”

“We serve 140 students today,” she said. “We offer after-school homework assistance, tutoring, enrichment. We provide a snack for them. It’s just a safe place for these students to go in the afternoon after school.”

Naron said tables for the event have sold out, but general admission tickets will be available at the door. For ticket information, visit www.bgcnms. org or call 662-841-6504, ext. 4.