Running club stays on the go 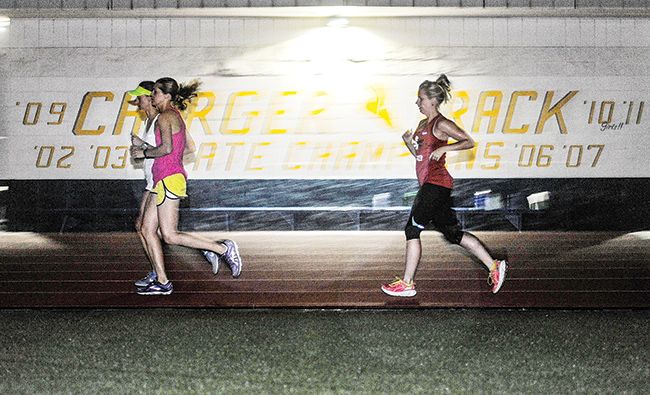 Members of the Oxford Runners Club run at the track at Bobby Holcomb Field, in Oxford, Miss. on Thursday, August 20, 2015.

She began running again in January 2013 to lose weight, and ran her first marathon, the Rocket City Marathon in Huntsville, Alabama, that December.

Today, Knight is one of the founding members of Run Oxford, a running group created by Oxford residents Knight,Marvin King, Nathan Hammer and Peter Straghan last December while sitting at a table in Newk’s.

By the time Oxford resident Tyler Meachum, 24, was a freshman in college, he was 6’5 and weighed 360 lbs. Diagnosed with tachycardia and high blood pressure, he was pre-diabetic and was tired all the time.

“I began a journey that led me to lose 150 pounds,” he said. “Looking back at pictures when I was well over 350 pounds keeps my drive to be healthy.”

Meachum encourages others who want to run to just do it.

“Start slow and find a comfortable pace,” he said. “Don’t be intimidated. There is a quote from John Bingham (a notable American marathon runner), ‘If you run, you are a runner. It doesn’t matter how fast or how far. It doesn’t matter if today is your first day, or if you’ve been running for 20 years. There is no test to pass, no license to earn, no membership card to get. You just run.’”

The group is partnering with the Oxford-Lafayette Chamber of Commerce to host a four-race Oxford Grand Prix in 2016, and it is currently seeking race sponsors.

“The idea is to encourage runners to register for all four races at the same time,” said King, one of the founders. “Prizes will be awarded in different categories for each of the individual races, but also for runners that compete in all four races.”

King said the four races are the Mighty Half and 5k that will be held in February, the Double Decker Spring Run in April, Lee Family Dentistry’s Splash ‘N Dash 5k in June, and The Great 38 in October.

“We will also have a race expo prior to the Mighty Half where all of our sponsors will have the opportunity to show off their wares to the runners and to the general public,” King said, adding that they need sponsors to produce great races with medals and prize money and to attract elite runners.

Open to all runners

Run Oxford is comprised of runners who have completed prestigious races in Boston, Chicago, San Diego, Austin, Atlanta and more.

“We are a community-based running group for runners of all paces,” said King. “Our goal is to create a sense of community for Oxford’s runners.

“We encourage people who might not consider themselves runners or athletes to believe in themselves and know that they can accomplish any running goal they want to achieve.

“But, we are also there for established runners who want to take it up a notch and break their personal bests or qualify for elite races like the Boston Marathon.”

Anyone can join the group and participate in group runs that are listed on the group’s Facebook page. The group also sends out weekly emails.

“We do have dues for paying members, and we use those funds to help offset our long-term costs,” King said.

Run Oxford sponsors several group runs each week. The most popular run is the group’s 7 p.m. Tuesday track practices at Lafayette High led by Amy Beene. With school starting, they may adjust the schedule.

King said Run Oxford also aims to give back to the community.

“We are all about community engagement,” he said. “This is why our members are volunteering at the Family Health and Wellness Fair at the Oxford Conference Center on Saturday, August 22.”

Others will run in the upcoming St. Jude Memphis Marathon, a hospital fundraiser.

“With the funds we raise from the Oxford Grand Prix, we want to establish a youth running program in Lafayette County, assist More Than a Meal, and contribute to the Chucky Mullins Scholarship,” King said, adding that running is actually the most popular participation sport in America.

“More than 50 million Americans are runners, which is why the largest races get 40, and even 50,000 runners,” he said. “Oxford is already a great tourist destination, and there are hundreds of thousands of ‘destination runners.’ We want to tap into that passion and popularity and bring them to Oxford.”

“We welcome all paces, and we encourage people to use the page to ask questions, schedule runs with other runners that match their pace, but, most importantly, improve on what you think you can accomplish,” King said.

If you’re a fitness beginner, Knight recommends the Couch to 5k program.

“It gradually moves a person from walking to running in a safe, systematic, non-intimidating way,” she said. “I’d also recommend attending some group runs.

“Don’t be intimidated because we’ve all been beginners and can definitely relate. The great part about the group is the encouragement and accountability. You’re not obligated at all, but you’ve got understanding support.”